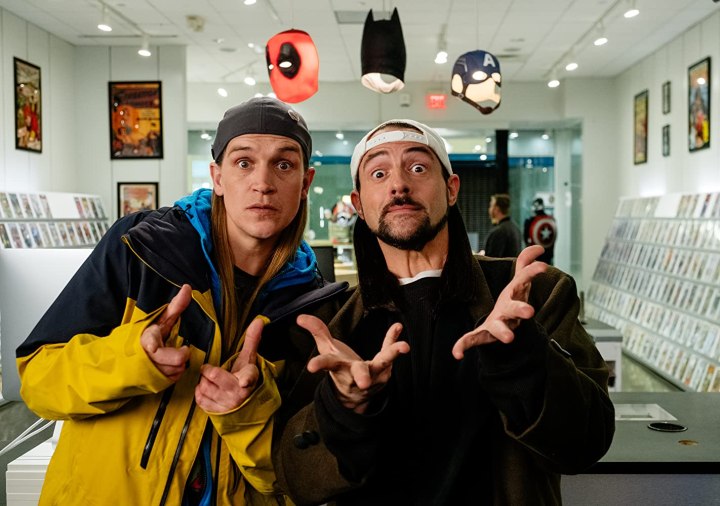 Kevin Smith’s latest film, Jay and Silent Bob Reboot, is my most disappointing film of 2019. Packaged as a commentary on Hollywood and how they’re out of ideas because it’s all reboots, this is an essentially worse redo of Jay and Silent Bob Strike Back, as Jay (Jason Mewes) and Silent Bob (Kevin Smith) try to stop production on a Bluntman and Chronic reboot. It follows the same structure but this time, there’s more “youth and diversity” as Jay’s daughter, Millennium Falcon (Harley-Quinn Smith), and her friends Soapy (Treshelle Edmonds), Shan Yu (Alice Wen) and Jihad (Aparna Brielle) tag along.

I’ll start with what I thought was tolerable and that’s the set-up with Jay and Millennium Falcon’s relationship. I find Harley-Quinn Smith boring as an actress but her character is the only thing that made me feel anything in this film. She’s also the only time I ever laughed at one of the main character’s lines. Smith’s commentary is smart, but I thought it got in the way, especially as he tries to relate a theme of fatherhood back to reboots, and that the fact that when you have kids, “they’re like your reboot.” It made a nice moment feel hollow.

From the get-go, the film mentions that the reboot they’re going to stop will be terrible. That makes this self-aware to a fault as I can’t tell if Smith actually intended to make this a terrible film. I also can’t tell if Smith has lost his touch or has just over-committed to proving a point that Hollywood has no creativity, by making a film bereft of creativity and skill. If that was the goal, it’s a successful film. I just hate it.

It’s a shame because I’m a Kevin Smith fan (I’ve only missed “Dogma”) but for every clever joke or moment here, there are 20 terrible forced moments at humour. This is the first film with this set of characters in the “View Askewniverse” where its humour feels forced. It tries hard to be funny, and still falls flat on its face. It’s surprising because Mewes and Smith himself are still fine, but this just doesn’t have the magic of his other films.

Smith prioritizes making fun of himself as a director and he’s a good sport about it. I like Smith as a person and that’s why it sucks that I hate this film. The only big laugh in this film is when someone acts out aggressively against Smith and a crowd member goes, “Oh, she must have paid to see Yoga Hosers.” It’s damn true because I didn’t pay to see that film and I still wanted my money back. Smith knows he’s made some stinkers and Reboot is now one of them.

This is also more fan service and advertisement for his better films than a real movie. It also just feels like Kevin Smith flexing his pop culture knowledge. It’s impressive, Kevin, now stop. He just focuses so much on the commentary that he forgets most attempts at story or characters. The “funny” merely settles for cameos (Ben Affleck’s works best), pop culture references and low-hanging fruit.

The laughs all miss so badly it felt like Smith was taking a handful of Hater Tots, grinding them in my eyes and asking me, “She’s named Millennium Falcon because that’s the name of Han’s ship! Do you get it? Jason Lee says ‘Hollywood’s not even making squeekquels anymore.’ Do you get it? It’s funny because he was in Alvin and the Chipmunks: The Squeakquel. What if I do a cute music cue as I smile at Jason Lee when we do this joke? Will that make it funny?” It’s just so in your face that I felt like if I laughed, the movie would pause and Kevin Smith would get down on his jorts thanking me for laughing at one of his jokes. It’s exhausting.