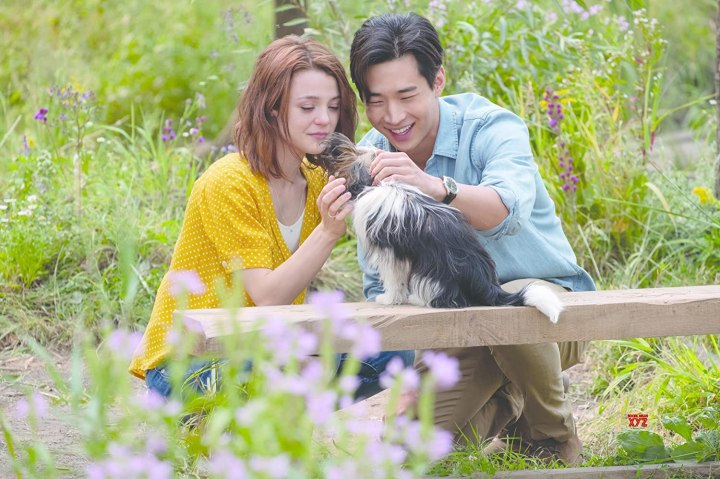 Of the dog films adapted from novels by W. Bruce Cameron, and with screenplay credits for him on each of the films, A Dog’s Journey is easily the strongest. 2019’s February release, A Dog’s Way Home, was a dull and annoying adventure and this film’s predecessor, 2016’s A Dog’s Purpose, was just okay, but it spent too much of the film with other owners other than Ethan (Dennis Quaid in both Purpose and Journey) as Bailey (Josh Gad in both films) learned his purpose is Ethan. Not to mention the trailers spoiled the ending.

That’s also a reason I prioritized avoiding the trailer for A Dog’s Journey. Okay, I probably saw the trailer once or twice in April 2019 but that’s the nice thing about waiting a year to watch this – I forgot about the trailers entirely, so this is mostly unspoiled territory. Anyway, this once again concerns the excitable Boss Dog/Bailey/Bailey, Bailey, Bailey, Bailey as Ethan and Hannah (recast with Marg Helgenberger) essentially raise their granddaughter, C.J., while her mother Gloria (Betty Gilpin) is off being irresponsible.

Hannah’s son, Henry, is the father but he passed away in a car accident before C.J. was born, and I’m pretty sure Henry is retconned into this film because I do not recall a Henry in A Dog’s Purpose. Gloria is an aspiring musician who thinks the world is out to get her, so in the first 20 minutes she takes her baby daughter away from her grandparents and leaves, because she assumes they want Henry’s settlement money.

With C.J. out of their lives, Ethan asks Bailey to come back in his next life and take care of C.J. like Bailey took care of Ethan. This follows Bailey’s journey as he helps C.J. (first played by Abby Ryder Fortson at age 10; and played by Kathryn Prescott at every other age when she ages many years in a decent guitar strumming transition).

I think this film has a leg up over its predecessor for one strong reason and that’s because, for the most part, the film has a focus that A Dog’s Purpose just did not have. In that film, Bailey died too many times and spent too much time with pet owners that weren’t interesting. Here, Bailey, now reincarnated as a dog named Molly, for the most part spends all her time with C.J. helping her through life. These scenes are sweet and sentimental, especially in the younger scenes when C.J.’s mom is off being a bad person, and in the teenage and young adult scenes when C.J. wants to be a singer-songwriter but is scared to put herself out there. No one believes in her besides best friend Trent (Henry Lau).

We get several characters that want to bring her down a peg and that’s when the clichés in the film start to get lathered on and it becomes relentless. The most prominent is the irresponsible mother routine put on by Gloria – Betty Gilpin plays both halves of her character well – and this leads to a like mother-like-daughter thesis as Gloria continuously gets into bad relationships, and C.J. picks one bad guy named Shane (Jake Manley) who is here for the most annoying conflict in the film.

These side characters are where the film feels at its most emotionally manipulative where Bailey tells us with Gad’s inner monologues that he doesn’t like these characters. They’re mostly annoying boyfriends – another called Barry (Kevin Claydon) is only there to be condescending to C.J. – and other characters here to waste running time. If there’s one main fault in this film, it’s the clichés and poor writing in its conflict caused by secondary characters.

This is a smart film to spend most of the film with the central character of C.J., as Prescott delivers a fine performance and is a likable character. The film takes a brief detour as Bailey/Molly spends time with a different owner as a dog named Big Dog to learn that in the next life he has to be Molly’s dog before any other human can claim him. This is the only time that the film loses focus and feels like it could end up on the editing room floor as it’s a five-minute stretch where the scene feels like it’s Big Dog saying, “No Molly? Guess I’ll die now lol.” I swear, I don’t really think that’s exaggerating what happens there. The Big Dog transition is mostly to advance us to another stage in C.J.’s life., but using Big Dog’s chapter and how Molly’s chapter ends to skip forward in C.J.’s life totally felt weak.

Voicing the dog, Josh Gad is good here and he made me chuckle a lot. His voice-work captures the excitability of a dog, and I generally never found his dog observations to be too obvious or stupid, as they got most of the dumb dog observations out of the way in the other W. Bruce Cameron doggie universe films. Gad helps make this entertaining.

I’m being critical of A Dog’s Journey, but I think this is a good film. It has a strong heart and humour, something A Dog’s Purpose and A Dog’s Way Home especially have lacked. It still packs on the sentimentality but I was honestly interested in watching C.J. navigate through her relationships – well, the only one that matters – and see if she’ll get on the stage and share her songs. The redemption for certain characters is also heartwarming and Dennis Quaid’s strong in a supporting role (though, heavy old person make-up on him and Marg Helgenberger distracts big time at one point).

Most importantly, I don’t think feels that emotionally manipulative, where A Dog’s Purpose felt like it because of how many times the dog dies. Here, it hits the emotional beats well because it takes its time creating a strong central relationship (“When are you guys going to lick each other already?” asks Bailey/Molly/Max) and when there are tears because of A Dog’s Journey, they feel earned because it’s for the human characters and moments, not just because of the pups.