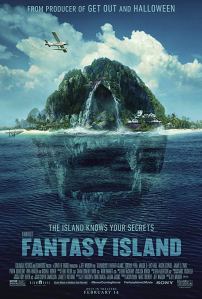 Fantasy Island’s the most frustrating kind-of film, one that has such an intriguing concept but no idea what to do with it. Based on the TV show Fantasy Island, this is a horror riff taken to the extreme: What if your deepest fantasies come true, but they play out to their conclusion with deadly consequences?

That sounds interesting, an idea for a horror film that could either be great in execution or dead on arrival. As for this film, da plane da plane crashes before it even gets settled in. That’s not a hint at this film’s twist, but the twists and turns border on ridiculous and the big twist is hysterical. It’s a shame it’s silly, because this is the only point of the film where it feels cohesive.

The characters on the island, winners of a contest I wish were never held, aren’t interesting. Melanie Cole (Lucy Hale) just hits on the hot guys on the island right away, and we learn she was bullied daily by someone named Sloane Maddison (Portia Doubleday). Melanie’s fantasy is revenge on Sloane; and they bring Sloane to the island so Melanie can exact her fantasy.

That’s what makes me question the rules of the island. Mr. Roarke (Michael Peña) explains to Gwen Olsen (Maggie Q), whose fantasy is undoing one of her biggest mistakes, that this is her life now because she’s fixed the mistake. Now she’s married to the man she rejected and has five years of memories of a child she never had.

She’s only married and only has a child on the island, and when she leaves, isn’t she on her own again? That sounds like a nightmare – seeing you could have had a happy life and a daughter but none of it ever exists. That’s just psychologically twisted.

Also, if the husband and daughter are only creations of the island, why did they need to kidnap Sloane? They could have just let Melanie let her frustrations out on an imaginary Sloane without real-world implications. The island’s mythos is explored, but it still never makes sense.

Meanwhile, Randy (Austin Stowell) wants to be in the Army and is now gets his chance. It’s the portion of the film that brings this into the adventure genre and shows the beauty of the Fiji island. Stepbrothers Bradley (Ryan Hansen) and Brax (Jimmy O. Yang) are also present, contest winners just here to party in a mansion. They high-five obnoxiously and are the film’s attempt at comedy.

There’s so much going on here and that’s why it’s 109 minutes, a crazy amount of time to invest in a film so messy. The tone is handled poorly because every fantasy is a different genre: The stepbrothers’ fantasy is a bad college movie; Randy’s sub-plot is a war adventure with a weird time thing; Gwen’s is romance; and Melanie and Sloane are the only ones in a horror fantasy, as they try to figure out the island. The film also needs to tell us why Roarke is responsible for it all.

Balancing these genres and tones isn’t a task Jeff Wadlow is up for. He doesn’t direct the horror well, there’s just misplaced eerie scores when nothing creepy is happening and no tension built while a random burnt man haunts the island. Fantasy Island should be very simple on paper, but it’s all a lot to take in and follow. There’s also the cardinal sin of being damn boring for much of it.

When it comes to the conventional horror in the third act once everyone’s individual fantasies have concluded, there is some cohesion. It’s the first time it doesn’t feel convoluted, but it also becomes truly ridiculous with its twists. I could see this developing a cult following because the last 30 minutes are just so insane.

As for the acting, I wasn’t offended by any of and it’s passable. It would be nice if they tried harder, but this is just a vacation movie where everyone just enjoys Fiji, while also making a terrible horror film. I think Fiji is why everyone stayed on this project, because I can’t imagine anyone reading the script and thinking, “That was good.”

The screenplay (by Jillian Jacobs, Christopher Roach and Jeff Wadlow) is just awful. Half of this is simply bonkers and none of it works in the same film. I reckon the writers watched Fantasy Island in a hotel room one night, went down to the bar, got blackout drunk, wrote the outline for this film on a bar napkin and woke up in the morning and tried to make sense of it. This is the result: A fever dream that’s a train wreck you can’t look away from.