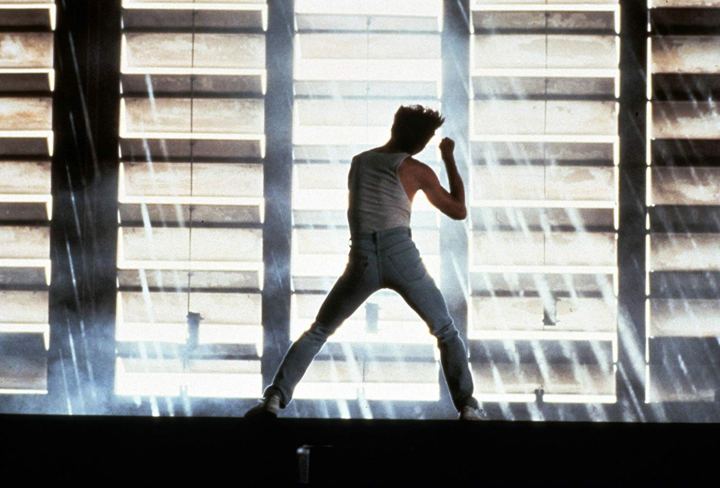 I’ll discuss some spoilers in this review, but I feel like I’m the only person who hadn’t seen this.

Released 36 years ago today, I don’t think Footloose has aged well. In the no-fun-town of Bomont, Utah, rock music and dancing has been banned by the town council and Reverend Shaw (John Lithgow) to protect the town’s teens.

Their logic is that they’ll only lead to drugs, alcohol and fornication. A city teenager, Ren (Kevin Bacon), moves to town and shakes things up with his rebellion, while also falling for the local reverend’s daughter, Ariel (Lori Singer).

Ariel was the biggest problem for me. Her recklessness and rebellion against her reverend father got old fast. She puts her life in danger on two occasions, getting nearly flattened by a semi-truck and then nearly run over by a train. Writing this review, I’m realizing it’s so she can feel how her brother felt when he died (in a car accident) but the scenes are weak without that context.

Rock music and dancing aren’t the problem with this town when teens are reckless like Ariel. Singer plays her fine, and Ariel started to win me over by the end when she stopped needing to get her father’s approval, and I liked the loss of her brother developing Ariel and her father. I found her dull for the most part and didn’t feel any chemistry between her and Kevin Bacon.

Before I get to Bacon, Shaw and his wife Vivian (Dianne Wiest) are the best characters here. Lithgow plays his role well and his arc is good, as he feels like he has to carry the weight of the town on his shoulders. Wiest is the highlight as Vivian for me. The scene where she speaks up to Shaw because he doesn’t see the bigger picture is the strongest scene. “You can lift a congregation up so high they have to look down to see heaven,” is a great line. Their scenes are engaging drama.

I had little interest in Ren and Ariel. Kevin Bacon’s fine as Ren, but the teens’ side of things is often uneventful. Until it gets to the point where they plan a secret dance, there was a lot of time killing like Ariel’s abusive boyfriend Chuck Cranston (Jim Youngs) challenging Ren to the ultimate display of masculinity: A classic game of chicken using huge tractors. I think this is what makes it feel like an ‘80s movie because it’s so ridiculous as it plays to “Holding Out For a Hero” by Bonnie Taylor. This is the point that I understood the appeal of Footloose and conceded that it’s simply not for me.

At least after dancing gets unbanned, the displays of masculinity can be dance battles. The screenplay by Dean Pritchford handles Chuck weakly as Ariel starts spending time with Ren and they forget all about Chuck. When they remember he’s a character, they bring him back to beat up Ariel and then bring him back for a fight at the end.

The screenplay generally makes a habit of bringing characters into the film and forgetting about them, even with Ariel’s friend Rusty (Sarah Jessica Parker) who disappears for like 40 minutes. The fact that Ren is given a hard time for being the new kid seems realistic. He deals with the oppression, and the town’s rules, in a healthy way with a workout dance to Moving Pictures’ “Never.”

I’m giving this film a hard time, but I had some fun during this. I liked the scene where Ren, Ariel, Ren’s friend Willard (Chris Penn) and Rusty went to a different town to dance. It was lively when they play the titular song (“Footloose” by Kenny Loggins) and Rusty wanted to dance. This was also the first scene where the teens felt authentic. My main question of this scene is why Ren thinks it’s unbelievable that Willard can’t dance when dancing has been illegal in the town for six years. Speaking of Willard dancing, the montage of him learning to dance is charming.

Some of the dance scenes are fun, but I found most of the drama boring. I felt like a kid at the beginning of the film sleeping in Church. I don’t like the film, but the soundtrack is an absolute classic. Every song on the soundtrack bops and my feet were tapping a lot during this. It’s just a shame that the story never reaches that same greatness.