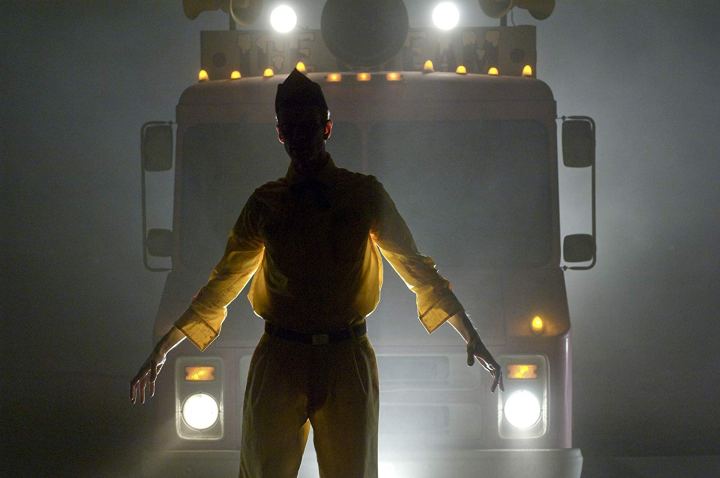 Since this is a 10th Anniversary Review, I’ll be discussing some spoilers, but I’ll still include a spoiler warning when I really spoil the plot.

Frustrated that humans are just generally terrible people, God sends his angels to Earth to bring on the apocalypse. We see the apocalypse start at a roadside dinner in the middle of nowhere. The archangel Michael (Paul Bettany) eventually helps this group of people because the waitress, Charlie (Adrianne Palicki), is pregnant with humanity’s last hope.

Legion is just a missed opportunity that doesn’t feel like it has its own identity. At times it’s a serious actioner toeing the horror line, and other times it’s tongue-in-cheek, silly and hilarious all in one. The film’s highlight is a possessed granny, Gladys Foster (Jeanette Miller), who cusses everyone out, goes totally bonkers and starts crawling on the ceiling. I feel like on the film’s 10th Anniversary (well, it was released January 22, 2010, so close enough), this crazy granny is the only thing people remember about this film.

It’s a genuinely freaky moment that is also just hilarious. The whole scene is decent and when Gladys gets killed, the film’s peak dies with her. The cast is an impressive little ensemble even if not everyone has great performances. Dennis Quaid phones it in as the owner of the diner, Bob Hanson, and Lucas Black (of The Fast and The Furious: Tokyo Drift fame) is a weak spot here as his son, Jeep Hanson.

Tyrese Gibson is fine, too, but honestly I watched this a week ago and completely forgot he was in this. That’s because the characters just aren’t that memorable, and the only characterization I remember is Jeep wanting to take care of Charlie, even before the apocalypse hits.  The other character work isn’t notable, as the only others of note are a family passing through including Sandra (Kate Walsh), her husband Howard (Jon Tenney) and their daughter Audrey (Willa Holland).

Audrey’s the only one who has anything to do, and Sandra’s just there to be a terrible, terrible character and a nuisance to the story as she blames her daughter for the situation because they stop at this diner because Audrey’s promiscuous and they were moving here (Nevada, I think) because of her. Newsflash, lady, the apocalypse is going on everywhere in the world. But to be fair this apocalypse is so concentrated here because of the baby inside of Charlie. I like Kate Walsh but her character is terribly written and she just brings so many unnecessary moments.

Paul Bettany makes a fine Michael, by the way, but it’s awkward that he never explicitly tells the group that he’s the famous archangel Michael. He’s just a Terminator type sent to help them and everyone takes that at face value because they don’t have a choice. Some of the action scenes of them warding off demons are fine, but they’re often unintentionally hilarious, especially when we meet small child with the deepest voice you’ll ever hear. There are some funny delights – like Doug Jones as the Ice Cream Man whose limbs extend and jaw widens and he starts charging the group. It’s one of the creepier visual moments.

The film tries to say a lot about fate and explores a lot of its religious themes in dull ways, largely in conversations between Michael and his brother Gabriel (Kevin Durand). The brotherly rivalry is made boring and is the most disappointing thing about this film. If you haven’t seen this and want to, I’ll pretty much only be talking spoilers from now on as I discuss most of the end of the film.

It’s disappointing to me when you have the potential of a big fight and a fight between two archangels is so pedestrian. Gabriel’s weapon is cool but it’s a boring fight scene. The third act feels like a weak re-shoot. The part that makes me think that is after Michael and Gabriel’s fight when Bob blurts out an action movie one-liner (I can’t remember the line but this film is so cheesy there’s a decent chance it’s “your wings are cooked”) before he blows the diner. Gabriel starts to fly away like he’s about to be blown to smithereens. The concentration on his face is the look of a man that is trying to escape imminent death.

Instead, he catches up with the fleeing Charlie, Jeep and Audrey a minute later completely unscathed. That makes me think they tacked on the escape scene after test screenings because no way Gabriel’s trying to get out of that explosion so quickly if he knew he’d be totally fine.

Eventually, Michael comes back from Heaven, an archangel again with his wings and everything, and then I think “Oh wow, now we’re going to get the memorable archangel fight!” I thought maybe it was trying to make up for the mediocrity of the first fight, but I gave Legion too much credit in that moment. Gabriel just gets angry at Michael – his inferiority complex has been building up too long – and charges at Michael and Michael just slices right through Gabriel.

Gabriel plops on the ground and that’s the end of the fight. It’s kind-of an uneventful smack in the face and the editing here (by Steven Kemper) is just ugly when Michael slices through Gabriel. You barely see it and it’s literally like five quick edits in one second. The non-fight just has the sense of an editor trying to put the finishing touches on a weak film and says, “Sure, that looks fine, I want to go home.” Truthfully, that’s what a lot of Legion feels like.