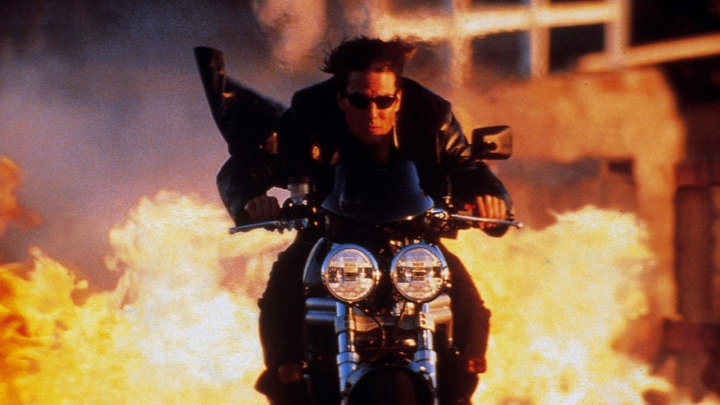 This review contains a few spoilers.

In Mission: Impossible II, Ethan Hunt (Tom Cruise) is rudely called away from his rock-climbing vacation for a new mission. His mission’s in Sydney, Australia where he must destroy a genetically modified disease called the “Chimera.”

For some of the film, skilled thief Nyah Hall (Thandie Newton) is put in the most danger. She’s an ex-girlfriend of main villain Sean Ambrose (Dougray Scott), a disavowed IMF agent, so she’s called upon to gain his trust. Things get complicated when Ethan also falls for Nyah.

This personal relationship makes it feel like there are more stakes than the first film. It introduces a love triangle dynamic that is interesting from Ethan’s side, but Ambrose is goofy during it. He has an inferiority complex because of the perfect agent Ethan, and he ugly cries when he learns Nyah isn’t loyal to him. I won’t shame guys who cry – I cry at everything – but it’s dumb for this movie.

The writing’s not great, but some dialogue is laughably bad enough to be memorable. Take a gem from Anthony Hopkins’ Mission Commander Swanbeck, for example: “This isn’t mission difficult, it’s mission impossible.” It’s not a bad title for a knockoff film.

Tom Cruise is good again as Ethan, and his long hair looks good as he’s kicking in slow motion. I liked some of the plot itself and the monologue, that’s repeated a few times, about Chimera being the villain and Bellerophon being the hero.

It’s an interesting Greek myth and it’s cool how it’s brought into the story. The story itself doesn’t have a ton of substance other than just trying to destroy a deadly virus, as you can summarize the first hour of the movie about a minute.

Director John Woo tries to distract from that with a lot of slow motion. The entire third act is a lot of Ethan just doing slow-motion kicks. There’s also a whole thing of Ethan shooting a stick bomb to blow in a door and then dramatically walking past the door through the flames, staring at Ambrose.

This silliness made me laugh and was fun, and I think this needed more slow-motion doves. The style of the film in the third act just makes this feel more like a John Woo movie than a Mission: Impossible film. That’s not usually a bad thing – but a lot of this explains why this is considered the weakest of the series.

Reviews of other films in the franchise: