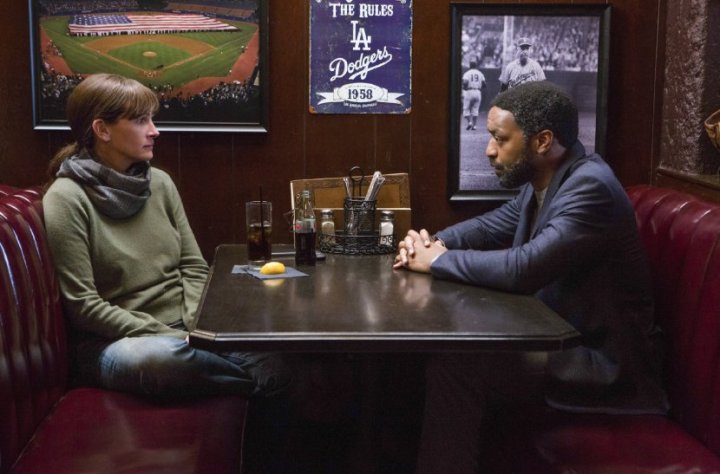 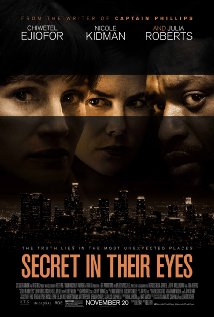 The film concerns Jess, portrayed with raw force by Julia Roberts, a police officer whose daughter is brutally murdered in the height of L.A. counter-terrorism following the September 11, 2001 attacks.

She seeks justice for her daughter and also wants vengeance from a suspect who was able to walk because of political mumbo jumbo that bogs down the plot to a point of frustration.

13 years later, a close friend Ray (Chiwetel Ejiofor) has tirelessly looked at pictures of convicted criminals all this time. Since he has gone to work for the New York Mets – I assume it’s as the director of security – he is unable to scan the photo into the computer or access face recognition technology. Though, it might have been easier to ask a cop buddy help him out.

The film is told in a needlessly confusing, non-linear flow where one can only tell the difference of the characters between 2002 and 2015 is that Dean Norris is bald in 2015, Chiwetel Ejiofor just has grey in her hair, and Julia Roberts’ Jess looks like a 50-year-old trapped in a 90-year-old’s body.

Seriously: If the point was to convey that this weight of emotional distress or focusing on something you can’t change, brings aggressive aging, they did it well. Kudos, make-up department.

As for Nicole Kidman’s Claire, you have to look at her on-screen partner to see if it’s 2002 and 2015. Nicole Kidman doesn’t seem to age… Ever.

Also bogging down the plot is melodrama between Ray and Claire’s characters – with the “will they end up together or won’t they” plot line. It seems that this is a main attribute taken from the original.

But this melodrama felt out-of-place in something that looked billed as a revenge thriller. It borrows themes from successful revenge stories – notably Denis Villeneuve’s “Prisoners” – but no success is emulated in this only sporadically exciting thriller.

Sure, there’s a good set piece at a Dodgers game. And the scene where Jess finds her daughter is heartbreaking. Though: I question if her taking off her gloves and holding her daughter in the dumpster tainted the crime scene. There are good performances here, but they’re just as hatefully written and poorly-crafted characters.

While I fully understand Jess’ grief, she is unlikable. She never shows any gratitude to the one man – Ray – who has been trying to find Caroline’s killer and give Jess peace for 13 long years.

Seriously, she seems angry with him. When a central character bashes on the only person not purely fighting for themselves – it truly makes it hard to root for justice.

P.s., My apologies for the long hiatus there. I’ve been swamped with J-school and other writing so I will try to be more active on here as the month goes along.