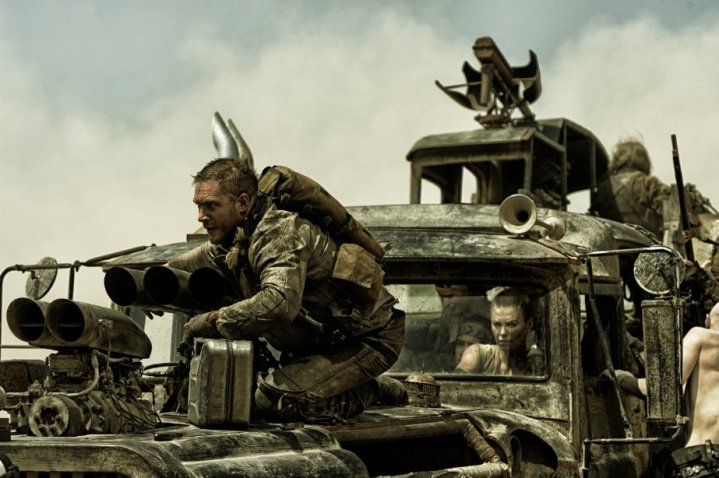 “Mad Max: Fury Road” is the fourth film in the popular Australian post-apocalyptic franchise. It’s a sort-of  reboot and a solo installment, merely referencing films previously in the franchise. It’s a re-imagining from George Miller, updated to where Max’s deceased child is a few years older than in the original.

The child actress is creepy, assisted with visuals – especially when her head flashes into a skull. If you aren’t familiar with the story of Max Rockatansky (portrayed by Tom Hardy, replacing Mel Gibson), he used to be a police officer in this post-apocalyptic world where his wife and child murdered.

George Miller simply portrayed Max’s past in the film’s prologue. It’s a time-friendly idea where we learn that the world is run by blood and oil, where Max operates on the most basic human instinct, to survive and evade the scavengers that occupy hostile territory of The Wasteland.

Max searches for a righteous cause, which he finds after he is captured by war dogs of the ruthless leader of Citadel, Immortan Joe – portrayed by Hugh Keays-Byrne, who also starred as Toecutter in 1979’s “Mad Max.”

Joe’s a wicked villain – ruling over Citadel’s people with water, which he calls Aqua-cola. It has been in serious decline since the apocalypse, where it has turned his people into dehydrated near-humans. They have decaying skin, something a bit worse than those in “The Book of Eli.”

His motivation is to keep power over his people, which is threatened when Imperator Furiosa (Charlize Theron), a war rig driver who takes a run to Gas Town to trade Aqua-cola for guzzaline, betrays him and takes his wives with her. What ensues is an amazing series of chase sequences to get Furiosa and his most prized wives back to Citadel.

Max gets in the mix by also wanting to evade his capturers and was transfusing blood to Nicholas Hoult’s Nux, who steals a few scenes. I also thought the fact that the war dogs wanted to go to Valhalla in the hall of Asgard was a great concept.

Max’s character doesn’t seem to be strictly the Max of the ‘70s and the ‘80s, prolonging the initial chase for about a minute before toppling over and being captured; where the Max of yesteryear would have gave a bigger fight. It seems like a way to preserve time and get right into the heart of the plot. His character is interesting, being hunted by scavengers and haunted by those he couldn’t protect. They come to him in visions, which adds an intriguing quality.

Humour is added to the film occasionally – in the form of simplistic visual gags and one hell of an awesome guitar player called the Doof Warrior (portrayed by musician iOTA), shredding a fully operational flame-throwing guitar on an 8-wheeler, while sporting a red onesie. Suffice to say, the character design is so creative. The score is also super fun.

Even though Max’s name is on the film, Theron’s Furiosa absolutely rules this movie. She’s defiant, independent, and mercilessly bad-ass.

Her intentions are noble – to search for redemption, as well as bring hope and a brighter future to the wives in Citadel that haven’t seen a good life. Their hope takes form in where they’re going, a place called the Green Place.

Furiosa’s an empowering female character and her relationships with the wives and between the wives – including actresses Rosie Huntington-Whitely, Zoe Kravitz and Riley Keough – adds a heartwarming quality that has been absent from the “Mad Max” franchise. Furiosa’s character occasionally reaches poignancy, which is effective for a film with limited dialogue.

That’s because the sole focus of “Fury Road” is being one gigantic car chase, and it’s a cinematic, visually pleasing spectacle, where by the end of the chase, people rarely end up on the same vehicle they started on.

There’s about 15 minutes where someone isn’t in a car and there’s rarely a time to rest from the non-stop action, as even when the rig needs to take a break, the oncoming enemy convoy just makes the need to keep going more urgent.

Some may be turned off by the fact that there isn’t a ton of dialogue. The storyboard and action sequences were created before the screenplay, and then it seems the writers figured out the logistics. But the stunts are magnificent and the narrative is compelling. It’s creative and the ride is pure madness, and Miller’s universe immerses.