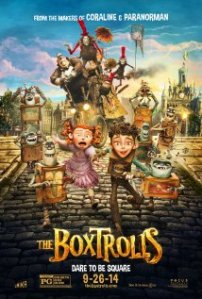 For the kids, The Boxtrolls is a colourful animated film that they will remember fondly for a crazy hermit who repeatedly says “Jelly!” For the adults, it’s a clever political satire of the power one man can have over a small populous by planting a single idea in their heads.

Archibald Snatcher (Ben Kingsley) convinces the townspeople of Cheesebridge that boxtrolls are a monstrous race that eat children and steal cheeses, and that’s not okay in a town called Cheesebridge. When a boy is stolen by the boxtrolls, a city-wide curfew is put in effect. Rumours fly that the boxtrolls ate the father’s bones. Snatcher uses this as an opportunity to spark a paranoia of the unknown.

In reality, they’re a misunderstood, harmless race that steal what they need, like tiny men from The Borrowers. Their appearance is reminiscent of the annoying Crazy Frog, and their timid personalities are much like turtles (the box is their shell). The logo on the box they wear is also their name. There’s a boxtroll called Eggs (Isaac Hempstead Wright) boy who obviously doesn’t look like the rest of his people. When Snatcher is hired by the town’s mayor (Jared Harris), Eggs tries to stop the numbers of his people from dwindling.

Snatcher’s malicious intentions find reason in motivation: To get a white hat that indicates prestige and privilege. Ben Kingsley offers memorable moments as Snatcher, a creepy, embodiment of Chitty Chitty Bang Bang’s villainous Child Catcher. He is perhaps out-starred by his three amusing sidekicks who are trying to snatch the boxtrolls. Richard Ayoade and Nick Frost voice a pair who bicker about whether they’re on the good or bad side of the situation. Tracy Morgan portrays the other sidekick, a sadistic Mr. Gristle. The villains use a local heartthrob, Madame Frou Frou, as a channel for propaganda.

When we get to the human “good guys,” things get less interesting. The supporting Winnie (Elle Fanning trying her best) is an uninteresting and mild brat. Her father (the Mayor) is too obsessed with the town’s main export, cheese, to pay attention to her. Cheese’s prominence in the screenplay is strange, one character even compares it to a mother’s smile on a warm spring’s day.

The character of Eggs at the film’s heart isn’t captivating. He leads a story of finding belonging. He’s at his funniest when at a public and prestigious dance. Otherwise, much like minions in Despicable Me, the boxtrolls steal the spotlight with their creative language and antics. They’re diverse (one has a pair of dentures) and amusing, particularly Shoe and Eggs’ caretaker, Fish.

The Boxtrolls boasts detailed animation and a unique visual style. For all of its faults – it’s both sporadically gross and boring – it works just fine. It will keep children entertained and it’s clever enough for adults.