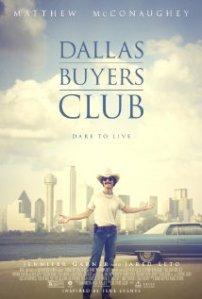 I haven’t seen many films about the AIDS disease, but one can sure tell it’s dealt with sensitively here by director Jean-Marc Vallée. Humour is able to be written into the screenplay because of the charming cast and the characters’ personalities.

The film follows real-life electrician and occasional bull rider Ron Woodroof, a stereotypical redneck who is racist and homophobic. His lifestyle consists of drinking, gambling, drug use, and casual sex. While in the hospital because of a work-related injury, Ron finds out he is HIV positive. Denial strikes and his homophobic personality makes him lash out at the doctor, since it is a disease that (mostly) homosexuals get. He is given thirty days to live. It turns out, he contracts the disease from unprotected sex. (Cloak the joker before you poke her!) In 1985, the drug called AZT that treats AIDS is still in clinical trials – so he has to get the drug somehow under the table. He learns from a doctor in Mexico that other medicines do the trick better than AZT, and this is his story of how he helps other people with AIDS to get better.

In 1985, the cure for AIDS was still trying to be found, so this is an ideal year for the film to be set in. The way hospitals went about testing the drug AZT for human trials is where HIV patients approved for the drug were divided into two groups. One group received the legitimate drug, while the other group received a placebo drug. It’s a little ethically questionable because the patients receiving either one of the drugs are dying, so… Some might be getting better, and the others are getting sugar pills. I guess it’s the only way to tell if it works. For the patients who are simply getting sugar pills, that’s where Ron Woodroof comes in. He offers the people of Dallas diagnosed with HIV a membership to the Dallas Buyers Club, where for $400 they can have access for all of the medication they need. The reason the hospitals are so frustrated with Woodroof is because the people taking the medication aren’t being monitored, and there’s no way to tell if they’d work or not. They’re filled with nutrients and proteins that help make more cells in the immune system.

Though, the film isn’t a boring pharmaceutical film, so that’s really good. I think the storytelling is very capable because mostly it is telling an inspiring and great story. Jennifer Garner’s Eve represents the doctors of the medical community understand Ron’s motivations to help people and himself. I think the way Ron opens up to the homosexual community is very charming. He’s an innovative and smart character, and McConaughey plays him so powerfully and with ease. But that’s not saying his body transformation to play the role wasn’t easy. It also musn’t have been easy for this actor to do the full actor transformation from rom-com star to full-fledged actor. It’s a great turn-around, and he’s becoming one of my favourites – where he plays a character who lives life to the fullest, and enjoys a new outlook on life.

McConaughey opens up to the community by doing business with them, but mostly by befriending a transsexual named Rayon (Jared Leto). They become business partners and friends, and the way Ron’s eyes are opened is beautiful. Homophobia is also depicted well and powerfully throughout the film, and often heartbreakingly. One can tell that Rayon has lived through a lot of discrimination, especially in one scene that I won’t spoil. It seems that there’s always been some controversy of Hollywood casting males in transsexual roles. I think that’s what might make the role so challenging for Leto, to let himself get enveloped by the role of Rayon, a flamboyant and hilarious character. But he absolutely nails the role. Most of the stuff coming out of Ray’s mouth made me smile, even if he has frustrating habits.

There’s a sort-of kindness to the character of Ron, where he wants to give medication to the people so they can survive and also live their life to the fullest. Even though many will struggle living a normal life with the unfortunate disease. In a film about survival, I think he represents those who can change over time. This great film also shows some of the most innovative ways to change society is by going under the law; and sometimes, it’s just a necessary thing, no matter what people say.