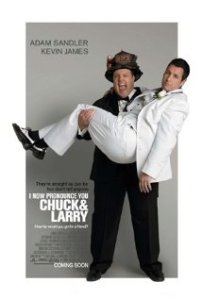 Adam Sandler is a real master of mediocrity. He enlists the help of his friends, a crappy buddy director, and usually a few crappy screenwriters. Usually. “I Now Pronounce You Chuck & Larry” doesn’t buck most of those trends.

The plot follows firefighter Larry Valentine (Kevin James) who gets a scare from a day on the job, and enlists the help of his buddy Chuck Levine (Adam Sandler), his best friend/town whore, to marry him so Larry can receive the domestic partnership benefits. Problems arise when the state get on their case, and are suspicious of their true intentions.

Dennis Dugan does nothing to buck that aforementioned “crappy director” trend. I mean, he’s okay here, since he directs the one action sequence in a burning building well. That’s something different for him. One trend is partly bucked: the crappy screenwriters. The screenplay is still silly, but Oscar-winning screen-writer Alexander Payne (“The Descendants”) very surprisingly is one of the three writers on board. It’s admittedly stronger than most of Sandler’s movies, and I can only assume it’s because Payne is on-board.

The sentimentality is sincere, but the chemistry between everyone isn’t awesome. This situation just isn’t believable, especially the fact that the screenwriters believe the gay community might actually hail these characters as noble heroes. The two main characters aren’t likeable enough. Jessica Biel is only okay, but everyone is phoning in their performances. Sandler is playing Sandler. There are some big laughs, but not enough by the third or fourth viewing.

Rob Schneider shows up as an Asian minister in yellow-face, so I guess it can’t get any more offensive than that. The movie’s predictable and all that, but it’s watchable, but be warned – some will be mildly offended throughout. One would think firefighters would be more likable than this, especially Dan Aykroyd. Nope, not really. It’s too long for this type-of hoax, and there are only a few big laughs to leave the bland taste out of your mouth. Young teens will be entertained, and I guess it does have some entertainment value, but I’ve officially worn it out.