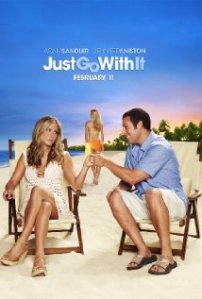 One can only watch an Adam Sandler flick so many times before it gets worn out. Apparently, one could only watch “Just Go With It” twice before it gets worn out. Adam Sandler and Jennifer Aniston have a good chemistry that grows better as the movie goes along. They never particularly hate each other, but they have to act like it because the hoax is that they’re divorced after many years of happiness.

The hoax is grown by Sandler’s Danny Maccabee who carries a ring around with him for years. He was left at the alter by the one he loved (his real life wife, Jennifer Sandler), because of his huge nose. He’s never been able to throw the ring away because if he has it, he won’t be hurt again. He meets an extremely attractive young woman, Palmer (Brooklyn Decker), and after she finds his wedding ring in his pocket, he makes up a story about how he is just getting divorced. Of course, she wants to meet her. The successful plastic surgeon Danny enlists the help of his assistant (Jennifer Aniston) to help him out with the cause, and her kids (Bailee Madison, Griffin Gluck) get sweeped into the debacle after the kid schemes his way into a Hawaii vacation. There, Danny and Katherine (Aniston) must keep the scheme alive without falling in love in the process.

The movie is watchable, but it isn’t great after multiple viewings. First viewing, it’s okay. By the third viewing, it’s not even good background noise. It’s usually fairly funny, but only if you like predictable humour. And even for a movie like this, it’s too tedious at 117 minutes.

Half of the occurences in the film just happen because they can. Nick Swardson has an irritating German accent, just because he can. He has goofy glasses. There’s no point to it, since Swardson’s character Eddie, Danny’s best friend, wouldn’t have met Palmer prior to the vacation he schemes his way on. Swardson also isn’t very funny, here. One of the only movies he’s been funny in, in all honesty, is “The Benchwarmers.” I also don’t know why Maccabee and Katherine had to tell people they were getting divorced while shopping and preparing for the charade.

Brooklyn Decker certainly isn’t cast for her acting abilities. She’s cast because she fills out a bikini well, but couldn’t we have gotten a young actress with talent and a hot bod? Alice Eve wasn’t available? Decker’s cleavage should have gotten higher billing than Decker herself.

Bailee Madison’s okay. Griffin Gluck’s terrible. His emotionless way about him is seriously depressing. Nicole Kidman has rarely looked less attractive than here. The humour is low-brow and predictable. The only true laugh might only be a “Lord of the Rings” reference. At least after multiple viewings. Even on first viewing, it’s difficult to recommend. This is at least way better than Sandler’s other 2011 release, “Jack and Jill.” But if you’re watching this for Aniston, just watch “Horrible Bosses.”