Overall, at least based on the movies I saw, July was mostly an okay month for movies. But then again, I only saw five (out of 15 of the) major theatrical releases. And out of those five I saw, I only enjoyed two. “Despicable Me 2” was the strongest of the ones I saw. “Pacific Rim” was the second best. “R.I.P.D.” was right in the middle with a score of 50. “The Lone Ranger” didn’t get a passing score because it was dull; and “Grown Ups 2” was torture. The average score for the five movies was 54.8, but take away “GU2,” the adjusted score is 65.5.

Most anticipated of August

There are a few releases coming out this month that I highly doubt I’ll be seeing. One of them is “Planes,” because “Cars” was a hard enough sell on me, and that’s Pixar. This is just a lame spin-off. I won’t be seeing “This is Us” because I’m not fond of One Direction. I don’t think I’ll be seeing “The Smurfs 2” because I really didn’t like the first one. I liked the first “Percy Jackson” enough to give it a pass (I’ll post my review early this week), but I don’t think I’ll be itching to watch the sequel that comes out this Wednesday. But, if I’ve seen everything and it’s at my cheap theatre, I might watch it.

I’ll be watching “jOBS,” but I’m not extremely excited for it. I like a good bio pic, but my expectations aren’t high. Hopefully Ashton Kutcher impresses. The horror movie called “Random” could be okay, but Ashley Greene hasn’t impressed regarding the horror genre so far.

“Paranoia” looks decent because of the cast, mostly, and I’d like to see more corporate thrillers. “Closed Circuit” looks like a good thriller, as well. “We’re the Millers” could be very funny. I missed “2 Guns” this weekend, and since it looks like fun, I’ll check it out next weekend. “Getaway” looks like a good thriller, like “Closed Circuit.” “The Mortal Instruments: City of Bones” looks as if it could be a good movie, and I enjoyed the book. (Though, I always envisioned Alex Pettyfer as Jace while reading, not Jamie Campbell Bower.) 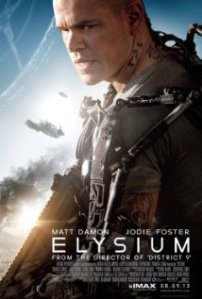 “The Butler” looks like a great bio pic, and civil rights movies can be interesting. “Prince Avalanche” looks like my kind-of oddball humour. I’m mostly excited for “Ain’t Them Bodies Saints” because of its cast.

My third most anticipated is “Elysium“. I haven’t seen “District 9” yet (I might check it out if I like this one a lot), but the story of this one seems really cool. Jodie Foster’s awesome. “The World’s End” is my second most anticipated because I love “Shaun of the Dead” and “Hot Fuzz,” and it seems like a great finish to the trilogy. The team of Edgar Wright, Simon Pegg and Nick Frost is comedy magic. “Kick-Ass 2” is my most anticipated movie of August (and one of my most anticipated of the year) because I LOVE the first one, and this one looks like a lot of fun. I can’t wait to see Jim Carrey be downright hilarious again. (“Hahaha, yeah, there’s a dog on your balls!”)

What are you excited for this month? Let me know in the comments!

14 thoughts on “Recap of July, Most Anticipated of August”