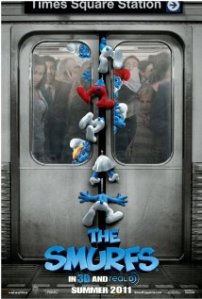 This is not my type of movie. I watched it because I wanted to see how bad of an animated movie many people say it is. It’s torture, in all honesty. I feel bad for all the parents who get dragged to this. Some of it’s really amusing to kids and I even got a laugh out of it at one point; but that’s it. The story’s terrible, as is the villain, Gargamel (Hank Azaria). The story is this: When the evil wizard Gargamel chases the tiny blue Smurfs out of their village, they tumble from their magical world into New York City. It’s okay how the writers show that the smurfs are in an odd land, but it isn’t even worth a giggle most of the time.

I don’t think I watched the show much as a kid; but I can tell that all the charm and magic of the original show has been squandered in the money grabbing way Hollywood turns that ’80s classic into a visually great CGI-live action mash-up. However, the movie is more annoying than charming. There’s just nothing going on. Neil Patrick Harris and Jayma Mays do their best. It’s also cool to hear so many celebrities voicing the smurfs (Katy Perry is Smurfette, George Lopez is Grouchy, Anton Yelchin is Clumsy, etc.). But it doesn’t feel like they are the characters so many adults loved as kids, because many are just versions of the actor voicing them. At least those celebrities are more for the adults than the kids, because the kiddies won’t know half of those celebrities from Adam.

The movie just doesn’t do anything for the animation genre and it is torture for adults. It’s up there with “Alvin and the Chipmunks: Chipwrecked” as one of the worst animated movies ever. Though, animated movies are usually pretty good, so it’s not the worst statement in the world as the movie is still getting a 38.  “The Smurfs” is just tedious. The little blue things substitute the term ‘smurfing’ for whatever word they want, so this feature becomes smurfing irritating really smurfing quickly.