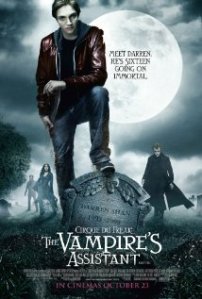 Teenager, Darren Shan, meets a mysterious man at a freak show who turns out to be a Vampire. After a series of events Darren must leave his normal life and go on the road with the Cirque Du Freak and become a Vampire.

This isn’t near-awful, but it isn’t that good, either. The character’s ambitions are strange, like how Hutcherson’s character aspires to become a vampire… It’s fairly obsessive and weird. This is sort-of a stange blend of supernatural wars and events, but it also touches on teenage angst. Mostly how Hutcherson’s character feels he is surrounded by idiots and isn’t accepted; and the non-normative transformations certain characters endure.

Chris Massolgia won’t make you want to root for Darren. He’s just a dull presence. Also, it was so hard to care for him at times, I was rooting for the friend-turned-foe, Hutcherson. This is just a really forgettable flick. It’s one of those movies that is decent to watch on TV when nothing interesting is on; or one might put on when they’re just puttering or dabbling on the computer. It’s effective background noise.

The style and cinematography are great, and there are some engaging scenes. It’s refreshing to see a comedy director (Paul Weitz, American Pie) take on something so strange. The thing is… The story isn’t that interesting. It’s about some fat guy called Tiny who tries to spark a war between two vampire clans. One of the clans has a vegan attitude (the side Darren and Crepsley are on), and the opposing side has that stereotypical, blood-sucking, fleash-eatin’ attitude. The screenplay is written by Paul Weitz and Brian Helgeland (the guy behind L.A. Confidential). One would think a screenplay co-written by Helgeland would be so much better!

John C. Reilly works the role of Crepsley. Overall; it’s slightly creepy, but it’s a mostly bland, strange tale of the supernatural. It’s a weird genre blend, and some of it just doesn’t work. You probably won’t be begging for a sequel. This is, at its most basic, a movie about teenage angst set during a war between vampires with an Olive Garden lifestyle and vampires with an Epic Meal Time (just with human meat, kinda thing) lifestyle.