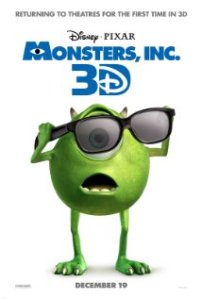 Tagline: Monsters, Inc. : We scare because we care

Monsters, Inc. is the fourth film that Disney is re-releasing in 3D (along with The Lion King, Beauty and the Beast and Finding Nemo) and the second for Disney’s Pixar. They are a studio that knows how to use the modern 3D visual effects with fine moderation. It seems as if they only visually enhance the best action scenes in a major way.

A city of monsters called Monstropolis centers around its power company, Monsters, Inc. That said power company generates the city’s electricity by scaring children half to death – they go into the human world and the more they scare the children, the more power they generate. The top scarer is James P. Sullivan (voiced by John Goodman), the lovable and cuddly big blue guy. At least, he’s lovable to his friends in the monster world – he’s the fuel for nightmares in the human world. He and his little green bowling ball buddy, Mike Wazowski (voiced by Billy Crystal) are the perfect dream team and the best of pals. One day, Randall (voiced by Steve Buscemi), a chameleon-like bogeyman leaves a door in the factory on purpose to steal the child he scares and use her for sinister purposes. However, Sully gets in the way – and the small child, Boo, wreaks havoc in the monster world and may just drive a wedge between the relationship of Sully and Mike. Will they be able to return Boo home and avoid Randall by all means?

The concept for this film is one of the most original for animated features to ever see the big old silver screen. While the children of that world are afraid of the big old monsters hiding in their closets every night; those monsters are terrified of an adorable girl in piggly wiggly tails and even a human sock that has an interaction with their skin. It’s very clever and fun. While the concept may be somewhat edgy for a family feature, it turns out to be fan-freaking-tastic.

It’s helped out by its fast pace, visually great action sequences and laugh-out-loud comedy. The comedy is astounding for the children, and it’s thoroughly enjoyable for older audiences. Everyone can really relate to this, as we as children would check under our beds before we sleep or ask our parents to inspect the closet for bogeymen (heck, I even look under my bed now from time to time – and I don’t even have a closet door any longer).

It is fairly surprising that one can so easily relate to this feature, as it is a simply refreshing and brilliant story about monsters who are terrified of little children, and vice versa. It also brings much truth to the “They’re more afraid of you than you are of them.” That is especially true for one monster, George, one who constantly gets mauled by the Child Detection Agency.

The story is great and it’s an overall splendid feature, but the real charm is in the voice performances. Goodman and Crystal convince us that they might as well have been friends for life, and the other chemistry is fine. Everyone involved does a great job, especially Mary Gibbs who voices Boo, and I’m pretty sure the only coherent word of English she utters is “Kitty,” the nickname she assigns to Sully. She is also a young girl who, unexpectedly, changes the factory and the hearts of a few select monsters for the better. You know, There are more powerful things that the sound of children screaming.

In a nutshell: Monsters,  Inc. is one of the most original animated features to see the light of day, and it is one of Pixar’s best. It is really a treat to be given the opportunity to see this in theatres again, and just a few months before the much-anticipated prequel.