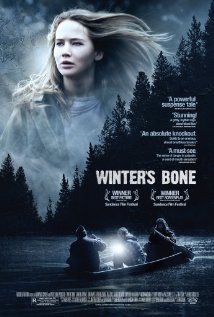 This independent feature explores the life of a 17-year old girl in the poor rural area of Ozark Mountain.

Ree Dolly (Jennifer Lawrence) takes care of her depressed and withdrawn mother, and her younger brother and sister, while her drug-dealing father is nowhere to be found. Much to her dismay, the local Sheriff tells her that her father put up their house as collateral for his bail, and unless she can find him and convince him to show up at the trial in one week’s time, they’ll lose the house.

This follows Ree’s adventure as she looks for her father, and must keep her family intact at the same time.

It’s pretty great that Ree remains so optimistic about finding her father, even when everyone tells her that he’s probably dead. She enlists the support of her friends and her Uncle, Teardrop (John Hawkes). You can tell that it’s sort of a mountainous community with a name like Teardrop.

Ree’s strong nature is admirable for such a young age. She has help from a few neighbors, but a lot of the community is not helpful at all and a little violent. It is interesting to see Ree teach her younger siblings life skills (like chopping wood, shooting, cooking) in this modern, rural, poverty-stricken community. The viewer would certainly hope that she finds her father soon, because it would suck for her family to be kicked out of their home and be forced to be homeless.

I’m not a big fan of the atmosphere, it’s just a little too slow for my liking. I wanted to see it because apparently it’s Jennifer Lawrence’s best performance to date (which I agree with) I had heard good things about it, and I was intrigued by the poster. The poster sort of reminded me of Deliverance, so I thought I was in store for a good old adventure film (because of the boat and the forest), but I was really wrong. What I received is a good substantial family drama, which is mostly enjoyable.

I don’t understand some of the violence, or really the family dynamics of it all. Some of the people of the community are really nice, but some are extremely brutal and anyone with common sense wouldn’t have the nerve to mess with them. Ree is just a little too stubborn to listen to any sort of warnings.

This is also about as fast-paced as Fat Bastard running to a salad bar. The last bit of the film is great, but the build-up isn’t extremely memorable for me.

Winter’s Bone is great because it shows us that Lawrence is capable of being an amazing actress. The fact that Ree never gives up hope and always wants to care for her family is really quite great. It’s flawed because of its pace and I really personally didn’t fall in love with the atmosphere. Winter’s Bone is also very impressively made, and it is one of the finest independent films of 2010.