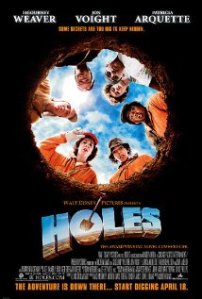 Tagline: The adventure is down there… start digging April 18.

It’s a nice and unpredictable children’s flick that even adults can enjoy.

Stanley Yelnats the Fourth (Shia LaBeouf) is a poor young teenager who has a pretty unique family. The Yelnats family has been blaming their no-good-dirty-rotten-pig-stealing-great-great-grandfather for years, who brought a curse upon their family a while ago. Stanley hasn’t exactly always had the best of fortunes, and his bad luck is just beginning. After a pair of stolen shoes, belonging to a former speedy baseball player called Clyde ‘Sweetfeet’ Livingston, fall on his head from walking home one day; he gets sent to a juvenile detention camp called Camp Green Lake. The Camp doesn’t really have a lake at all, and the runners of the camp believe that digging holes everyday in the hot sun will strengthen the campers’ character. Stanley builds strong friendships along the way, and must solve a several year-long mystery of why they are actually digging there.

The characters are really good and the cast bring something great to the table, sometimes the screenplay feels a bit messy, but it all works pretty well together.

There are a few reasons why the film doesn’t work as well as the novel; there are just so many subplots that it can make the film pretty crowded. The subplots really are all interesting, so it isn’t a total loss. In the book, it is obviously divided by chapters so it is much easier to follow.

Some of the subplots include: how Stanley’s no-good (well you get the idea!) great-grandfather came to put a curse on his family; the story of Kissin’ Kate Barlow; and how actual Green Lake used to be a town and how it looked before the lake turned into desert. They are quite interesting and they all very much relate to each other in the end.

There is some comedy, adventure, drama and mystery all mixed in here. There are some solid characters, like Stanley who just wants to fit in as the new kid – and soon assumes the nickname of ‘Caveman’. Zero is also a great character, a seemingly quiet and troubled character who can really talk once he’s interested. All the characters add something nice to the film, even if you don’t really like them – they’re charismatic either way.

Both the adult actors (like Jon Voight, Sigourney Weaver and Tim Blake Nelson) and the younger actors each act their parts very well. Voight plays Mr. Sir (whose real name is Marian), who is very irritable after quitting smoking, and is pretty-trigger happy with those CGI yellow spotted lizards (“If you get bitten by a rattlesnake, you won’t die, usually. But if you get bitten by a yellow spotted lizards, you will die, a slow and painful death…always,” my favorite monologue of the character). Weaver plays the lazy Warden, who hogs all the damn shade on the whole camp. Nelson plays Dr. Pendanski, the pretty stupid doctor of the camp.

Something I found pretty interesting: Richard Kelly originally wrote an extremely dark and violent post-apocalyptic version of the story which proved much too mature for a children’s audience. Louis Sachar, also the writer of the novel, wrote a screenplay as well and the studio chose that one in favor of his over Kelly’s.

There’s also a really good book sequel to this, called Small Steps that’s a spin-off [of the first book] depicting Armpit’s life outside of Green Lake, and how he’s trying to merge back into society, befriending a mentally disabled (I believe she was epileptic) young girl on his street. Though, of course, a character from his life at Green Lake has to come and screw it all up with a business scheme, and who better than X-Ray to do the trick? Hey, Sachar, I’m still waiting on the movie! I say hopefully…

Holes offers a great and unpredictable experience. Adults can enjoy it, too, as well as kids and it is completely durable and sometimes comedic. The film can be pretty messy in some areas, but it makes up for it in the charm of it all. It’s a childhood favorite of mine and I still enjoy it to this day. It can get a little lengthy, but it doesn’t drag on too much. The cast do an incredible job, and there is a great music video at the end. The film is just really well done. It hasn’t been worn out yet after a large amount of views.