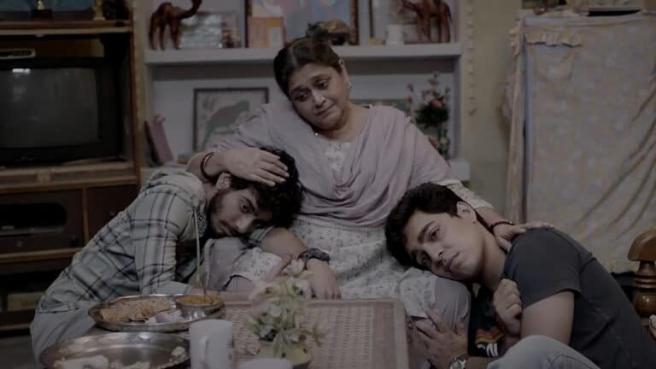 I have read a quote about when there’s a threat to one’s family, go all in; “family comes first, others not.” Cinema has often used stories based around families to show this vital message. The recently premiered series, Tabbar from series director Ajitpal Singh, is another addition that revolves around familial tragedy, leading to a change in family dynamics.

Taking place in Jalandhar Punjab, our protagonist Omkar Singh (Pavan Malhotra) is a retired police constable turned grocery story owner. He’s a true family man at heart who loves and cares for his family; as he lives with his wife, Sargun (Supriya Pathak). One of his sons, Tigi (Sahil Mehta), wants to be a social media influencer. His other son Happy (Gagan Arora) is preparing for his Indian Administrative Service (IAS) exam in Delhi.

When Happy is on his way home from Delhi on the train, he accidentally swaps bags with someone at the station who has the same bag. It brings an undesirable visitor to their home, one on decision puts this ordinary family in a situation where their world is turned upside down, made worse when the decision puts them on the radar of local businessman and politician Ajeet Sodhi (Ranvir Shorey).

As days pass, circumstances change; father and husband Omkar tries to protect the family from danger as he deals with more and more problems. The rest of the story is about a family man trying to save his Tabbar (family) from failing and suffering; and deciding if his family will be hunted or become the hunters themselves.

Written by creator Harman Wadala, with Sandeep Jain and Mr. Roy, they’ve made exemplary work in this story dealing with the tragedy of an average family forced to do the unthinkable. The screenplay’s crisp and spot-on, with an earnest story about human behaviour. The writers have smartly touched on many critical subjects that Punjabi is dealing with; like drugs, youth influence over pop culture, as well as bad politics. Despite the multiple narratives, the story focuses on his core subject that deals with family, emotions, and human nature’s complexities.

Series director Ajitpal Singh has given exceptional vision to the narrative; using framing that connects speakers to the audience. He captures the elements of family perfectly, and besides excellent direction, and credit is due for showing real locations of Punjab, instead of what’s usually put on-screen, as he showcases the family in their true environment in the city.

Certain scenes give you goosebumps; others provide laughter, all coming from situations brought to life from Ajitpal’s direction. He commits his contemplation to little moments and discrete sequences, rather than a bigger, chaotic picture. The story also has a dark component, which is cleverly balanced with emotions and reality.

This series ticks all boxes for an engaging, dark and thrilling family drama, and brings about the right questions on morals, ethics and righteousness, and discusses them rather than sway the audience one way. Arun Kumar Pandey’s cinematography and camerawork is claustrophobic; framing shots in a way where you feel confided like its characters. Conversely, he’s finely captured the landscape and desolation of the family’s universe with wide shots.

In the show, each episode starts with a quote from Muslim preacher and mystic Baba Farid, which helps set the right tone. The music by Sneha Khanwalker is a delight, bringing depth, rawness and horripilation. Parikshhit Jha’s editing keeps each episode sharp and crisp, helping the dramatic storylines oscillate from one to the other, while still striking a balance.

Pavan Malhotra, who’s been phenomenal work for a long time, as Omkar is essential, and is the central character from whom the series branches out. He gets into the skin of Omkar, a man whose ethics gradually become dark and violent. It’s fair to say it’s another addition to his stellar work.

In the supporting cast, Supriya Pathak comes from a theatre background and plays Omkar’s wife, Sargun, who loves her family. The chemistry between Pathak and Malhotra is exceptional. Together, they will make you emotional and haunt you simultaneously.

Gagan Arora is remarkable as Happy, the eldest son; bringing appropriate charm and intimidation. Sahil Mehta as Tigi delivers complexity with ease. Ranvir Shorey brings another subtle performance as Ajeet Sodhi, the politician; his rage and emotions setting the tone for this story. He could be used even more. Paramvir Cheema’s acting is astounding in the role of a cop. The way he’s shown the emotions of innocence and range burning inside someone is spot-on.

Tabbar takes its time to build, but it’s an exquisite dark thriller, both gripping and engaging. It has everything a viewer has come to expect; from its adequate story, to quintessential direction, to fantastic acting. Without a doubt, it’s a must-watch.

Tabbar is an 8-episode web-series currently streaming exclusively on Sony Liv, an Indian-based streaming service available in countries like India, United Arab Emirates, and other countries; as well as Canada in North America.