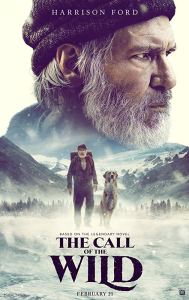 I haven’t read Jack London’s original novel The Call of the Wild, but considering it is his masterpiece, I doubt Chris Sanders’ 2020 adaptation lives up to it in any way. It’s a dog’s journey as Buck, a St. Bernard-Scotch Collie, starts out with a rich family (Bradley Whitford is the patriarch) where he plods around the house like a bull in a china store and ruins lunch parties. Then he’s tricked into a dog catcher’s truck, abused and sold onto a dogsled team in the Yukon in the early 1900’s.

This sled team is run by a man called Perrault (Omar Sy) and his wife Francoise (Cara Gee), who deliver mail throughout the Yukon. This portion of the film is its strong suit, and in five minutes is already a better film about delivery dogs than last year’s Arctic Dogs. The best adventure scenes are in this portion, especially one on a frozen lake and a separate escape from an avalanche. These scenes are both worth watching. I liked Omar Sy as Perrault and there’s good humour here, too. I found myself emotionally connected to the story during these scenes.

It’s all a bit strange that Harrison Ford, as John Thornton, isn’t a major player at this point. Ford doesn’t become an important character until the film’s second half. This is bizarre knowing it’s advertised with Harrison Ford as the star, and it seemed like he would be in the film in its entirety. Technically, Ford is there throughout.

He doubles as the narrator telling Buck’s story – but that doesn’t make sense. He tells Buck’s story even though he is not present for the entirety of it. He tells us things that he can’t know, but the story isn’t good enough to competently tell its story without this narration. I’ll think of it as Buck narrating his own story in the third person and his inner voice is Harrison Ford. It would be awkward during dinner if Buck would talk and Ford’s own voice would come out, though this is the only explanation that makes sense.

The CGI is so distracting and I don’t see why the normal dogs couldn’t just be regular dogs. Buck at least has a reason because he does incredible and inspiring things that no normal dog can do. When he isn’t doing those things, why couldn’t he be played by a normal dog? Some of his actions border on amazing, but others are cartoonish – especially a hilarious moment where Buck bites a Siberian Husky by the neck, flips him in the air and literally body slams him into the snow. The WWE has never looked so fun.

The emotional aspects would be better if we knew we were caring about a dog that’s actually alive. He’s just so expressive and so weird looking, and it’s distracting when it looks like he’s always about to talk in his inner Harrison Ford voice and ask for a Scooby Snack.

Besides Perrault, the humans aren’t much better. Harrison Ford as Thornton isn’t that interesting here. He’s not bad at all, as he’s quite passable phoning it in. He shows up in the film as someone who just spends his days drinking to forget about trauma from his past. The Gold Rush aspect of the film brings about a message of living within your means, and Thornton shows that well.

He’s a dog person who protects Buck from abuse, and that comes in the form of the lazily-written antagonist Hal (Dan Stevens), an upper-class schmuck searching for more wealth in the Gold Rush, convinced he’ll be able to find gold with the help of Buck and the other dogs.

The Call of the Wild doesn’t need antagonists – the man vs. nature aspect works well enough – but Hal completely kills the decent pacing as a hammy, one-note villain who just wants his gold. The film makes me hate Dan Stevens for 40 minutes and that sucks. Karen Gillan is criminally wasted as his wife, Mercedes, only there to sit in the sled and protest when Hal pulls a gun on the poor CGI creatures. She literally has less than two pages of dialogue. I’m a big fan of Dan Stevens, but he’s just here to twirl his moustache (which he never twirls) and chew the scenery.

Speaking of the actual scenery, Janusz Kaminski’s cinematography is great. There’s some truly solid adventure here, and once Buck starts hearing the call, it’s sort-of intriguing near the end. The film is just not consistently spectacular enough to see in theatres. This is also a film about following your inner nature. My inner nature is telling me if The Call of the Wild calls me, I’ll just mute it.