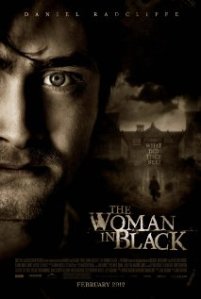 A young lawyer travels to a remote village where he discovers the vengeful ghost of a scorned woman is terrorizing the locals.

The Woman in Black is a solid horror drama that runs on unanswered questions. It is also an extremely effective and spooky tale that has the potential to chill you to the bone.

The chilling tale may not be for everyone because it is sort-of a period, gothic tale that may not fascinate all. However, those who could be intrigued by this should definitely check it out. A few things that make this stand out are the specific and interesting concepts that add a necessary fuel to the film: finding closure in the afterlife. The ghostly antagonist had someone close to them taken by someone, and that is their fuel to haunt the town folk and take their children.

The atmospheric tale runs on unanswered questions, and not all get answered in the end. This makes the feature thought-provoking, but it also makes it a frustrating experience. The purpose of spending 95 minutes on this film is to have the questions answered in the end, not to be left hanging. This doesn’t make the mysterious film have a good pay-off in the end, but the journey to actually get there is more than fine.

The characterization is pretty good. The main protagonist, Arthur Kipps (portrayed by post-Harry Potter, Daniel Radcliffe), is established as a widow who would do anything to protect his dearest son. This adds layers to him because he actually has the ability to relate to the ghost, because he understands what one may do to protect a child they have raised. Radcliffe has expressed he has some potential to be a great actor. He captures emotions like fear expertly. You’ll like him in this, too, if you don’t expect him to pull out his wand, and yell ‘Expelliarmus!‘ (or any other incantation) at the big old scary baddie.

In a nutshell: The Woman in Black runs on unanswered questions, and it is a solid experience until the last frustrating twenty minutes. It is mostly a great turn from Daniel Radcliffe, who has left the wand at home and jumped back to the 1860s.

Interesting fact about the feature: Adrian Rawlins –who played Daniel Radcliffe’s father in the Harry Potter series– played the same character in the 1989 version as Radcliffe plays in this film.