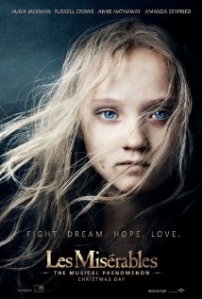 Based on the original stage production of the same name, this tells the story of a slave prisoner who skips on his parole, Jean Valjean (Hugh Jackman). Throughout his life, a police inspector, Javert (Russell Crowe), is close on his tail. After Valjean vows to a factory worker by the name of Fantine (Anne Hathaway) to take care of her daughter, Cosette, his life is changed forever.

I have not seen the original play, and I hadn’t even heard of the play before seeing this feature. Does that mean I live under a rock? Not really, but if I did, it would be a really fancy rock. Anyway, all the knowledge I had of this film going in was the slim plot synopsis on IMDb, and I saw a few of the trailers.

Expectations: exceeded. This is a fine feature that has superb direction, great costumes, a beautiful yet heartbreaking story, and one heck of an ensemble cast. The cinematography is fine (there’s a scene that’s hard on the eyes), and with the actor’s legitimate singing voices complementing the film and its phenomenal imagery, it might as well feel like the real on-stage production.

The only thing that makes it not feel like the actual on-stage production is all the information that comes at you. With a stage production, there would be short breaks to change sets and let the audience absorb what just happened; but this goes from set to set, and time period to new time period. This poor transition of scenes makes it feel like there’s a lot more to absorb. In a way, this is much like ‘Lincoln’ earlier this year, that film just shot information at you (even though this isn’t as bad).

One more thing that feels off about the film: the make-up. The costume design is stellar, but some characters are neglected regarding make-up because they don’t look like they age a day. They make Jackman look a little more older and exhausted as it goes along, and he looks like his hair has grayed; but Crowe doesn’t look as if he’s getting any older, over a span of seventeen years (or however many it is). He looks exactly the same. The same with the “comic relief” innkeepers (Sacha Baron Cohen and Helena Bonham Carter), they really don’t age.

The story is all about never giving up and searching for freedom wherever it may present itself. It’s also a great analysis of the survival of the human spirit, and the things it trudges along through. Though, the message gets slightly preachy. It feels more preachy than it is because they’re singing it to you! They sing to you all about revolutions because of poverty and searching for that said freedom, finding love, and it’s also a story about self-sacrifice and redemption. However, I was willing to accept it for what it is.

Valjean is a man really about always starting over and making it a clean slate for himself. I mean, he gets enslaved for nineteen years because he stole a loaf of bread. He soon highly becomes consumed with just protecting Cosette (Amanda Seyfried), the young girl who has become a daughter to him. All the other characters are pretty great, especially the villain you love to hate – Javert. He’s a good singer too, as is everyone else involved in this project. He is a man who lives by the law, despite all the times Valjean (who Javert usually refers to as Prisoner 24601, a number you won’t soon forget) tries to convince him to have a heart and let him go.

The only irritating character is a young boy named Gavroche, a petite thing part of the young people revolution. I understand that, at his core, the face of innocence – he’s just really, really, stupid.

Fantine is a character that really helps him [Valjean] change even further. She and he didn’t realize, that at the time, her asking him to take care of Cosette would be a life-changing experience for him. Fantine is a desperate woman trying to care for her daughter in a time of poverty, and her story is truly heartbreaking. She steals the scenes she is in with an Oscar-worthy performance (Jackman is also worthy of an Oscar), but the other performers are great, and they each capture the emotions they are supposed to, and they each sing with great heart. The ensemble make it that much more enjoyable. The young Eddie Redmayne shows some strong potential for more leading man roles, as he is one heck of a singer and a great actor. He also proves other people besides fat ladies can have a solid operatic voice.

While the story is slightly preachy, it undeniably has a very emotional core, making this one of the most emotionally vast films of 2012. The story is truly great, but it is definitely not the feel-good flick of the year. Each of the primary characters don’t want to be held back any longer, and live a better life than what they know. If the actors weren’t singing the vast majority of their dialogue, the film wouldn’t be quite as exciting. I am a sucker for period pieces, and now, I’m a sucker for this sort of profound musical.

In a nutshell: Les Misérables has a slightly preachy story, but it has a fine emotional core and a great set of characters and great actors that sweep you up into the sad story even more. You might as well be watching the on-stage production itself.