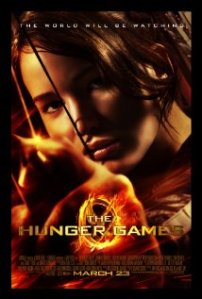 Tagline: The World Will Be Watching.

I favor the book.

The film is set in an America which, after a war, has been renamed Panem in the future.  As a cruel reminder to the people of Panem for a past rebellion, two representatives from each district, one male and one female, are chosen to for an annual lottery (where no one in the lower districts will want to win) called the Hunger Games. The Games are a fight to the death, where twenty-three of the twenty-four young teens die, with one lone victor. The Hunger Games is an annual propaganda-based reality TV show favourite, for the people of the Capitol at least. This 74th Annual Hunger Games marks history for District 12, as it got its first volunteer, Katniss Everdeen. Katniss took her sister’s place and it was a noble act, indeed. She must use her hunting skills/wilderness experience and sense of direction to stand a fighting chance to survive.

It’s a really interesting film that uses propaganda as a main theme, and just shows how corrupt the government has really gotten. For the young adult audience, it’s a very fresh idea; but I have heard that this film feels like a big rip-off of the Japanese film that was released in 2000, Battle Royale. I haven’t seen that one, so it won’t taint my view of this film at all, so it felt like a fresh experience.

A lot of it feels like just a youth spin of Gladiator (which I still have to find the time to watch), and the film sort of reminded me of an old Roman thing, bread and circus. The bread means food which the emperor would give to the people of Rome, and the circus meant entertainment.

In this case, the President would give food the people, and that’s what going on here, as the tributes have the option to put their name in numerous times in the raffle as a way to get more food (even though they should be getting more food in the first place, as it is revealed in the second book [I don’t think it’s a really large spoiler] that the people of the Capitol drink this fluid that makes them vomit, so they can stuff their faces even more). The entertainment is most obviously the Hunger Games, which is a reality television show put on for the people of the Capitol, which is really a heinous occurrence which would be pretty bad if it happened in this day and age (granted, it does make for a pretty interesting film [or book] idea).

The film really is quite entertaining and an interesting experience and has a really great ensemble, with a few great characters (that the writers actually want you to connect in any way with) and very intense sequences. There’s some really memorable action sequences, but don’t expect a full-throttle action thriller. Expect a nice adventure flick with a great heroine (push over, Bella!) with some solid action sequences, and lots of adventure and a bit of dramatic science fiction futuristic material.

Okay, some stuff I didn’t like about it. The first is a spoiler and the second is pretty spoiler, but expected.

I didn’t feel there was enough bonding time with Rue to be shared here. Not solid enough character development for her, as in the book.

I don’t see why Collins, like Stephenie Meyer, just had to add in a love triangle. It seems to be that it can’t be a young adult phenomenon without it. It’s very expected, so I didn’t really care for it; but at the same time is effective.

Okay guys, it’s pretty safe to read here. Some other stuff I didn’t dig about the film is that some of the material is a little unclear for those audience members who haven’t read the book, and I didn’t like that aspect of it. I would have thought that the loose ends of the background information would have been better connected with the actual author of the book (Suzanne Collins) having a writing credit for the film.

I feel that the film just needed a bit more violence to be better appreciated; readers could easily handle the violence portrayed in the book, so why couldn’t there be a lot more of it in the actual film? Sometimes young adult’s imaginations can be even more violent than what is portrayed on film, so I just didn’t care for it in that aspect. It couldn’t have even gone for a 14A rating? Or like a really strong 14A rating that could have been secured without going too far as to get an 18A rating? I know it’s a young adult audience, but seriously; more than half of the tributes were killed off screen.

In some ways it’s not an incredible adaptation, it isn’t quite on the same great caliber as Harry Potter or Lord of the Rings but outshines (or should I say… out-sparkles? I’m calling you out, Edward) Twilight by great lengths.

I guess this film review, that’s turning into a bit of an essay, should reach its conclusion soon.

It’s a film with a great heroine, great performances (by Jennifer Lawrence especially, who I wish the Academy will be so bold to nominate her for Best Actress; which I doubt will happen), great action/adventure sequences, and a story that offers a fresh enough cinematic experience. The film is a bit lengthy (with the Games starting about 65 minutes into the film), but of course there must be some background  information to be shared here, which could have been better-developed at that. For Oscars, I think the film should get Academy recognition (or at least large award recognition) for its Costume Design, Make-Up jobs especially, and its Cinematography, and even maybe a Best Picture nomination.

It’s a film with slow pacing at the beginning but gets great when it heats up, has many entertaining sequences, and could have been a better adaptation, as there’s a lot of room for improvement, but is a great experience for both young adults and even some adults can enjoy; and should be enjoyed by those who are willing to accept it for the quite unique adapted experience it offers.