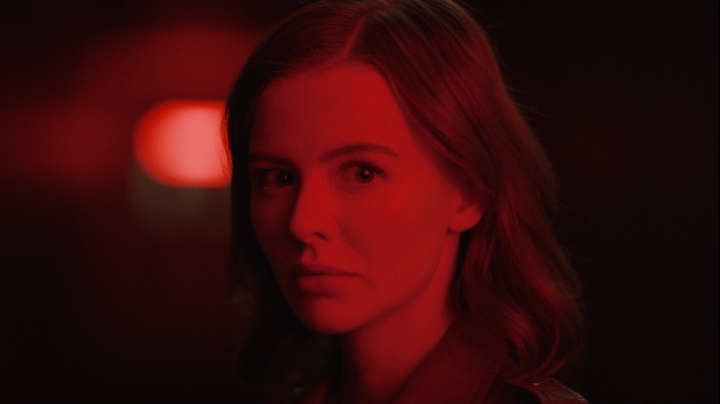 The film Drive All Night could be described as a fever dream, as the neo-noir takes us through a surreal night of adventure in San Jose as reclusive taxi driver Dave (Yutaka Takeuchi) starts his night like usual, but ends up picking up a mysterious passenger named Cara (Lexy Hammonds), who’s harboring a dark secret. On this night, she makes him drive around without a clear destination as he tags along for a number of obscure stops. The film also stars Sarah Dumont, Johnny Gilligan and Natalia Berger and is written and directed by Peter Hsieh in his feature debut.

For the first in a series of interviews with the cast and crew, I was able to discuss the film with co-lead Lexy Hammonds, who plays the mysterious passenger, Cara. We talked about the film during its run at the film festival Cinequest (which ran from March 20-30). We chatted what it was like premiering at the festival, building chemistry with co-star Yutaka Takeuchi, what it was like filming in the car, the costume design, video games and her character’s obsession with them, working with the rest of the cast and her character’s obsession with conspiracy theories (minor spoilers there).

There’s more in between in this fun conversation – especially learning which celebrity she’d love to share a cab with – that you can watch below and download the podcast version here. (I’ve included a player at the bottom of this post, too.) I’ve also included two Q+A’s from our conversation right down below.

As well, though its first festival stop at Cinequest is over, the film will be making its next festival stop in May, and you can follow the film’s Instagram page and visit their website to stay tuned for that announcement and updates coming in April. I will be posting solo interviews with Yatuka Takeuchi, Sarah Dumont and writer/director Peter Hsieh later in April and early May, so stay tuned.

Daniel Prinn, Filmcraziest: I was curious to ask about your character design with the NASA jacket, where did you guys find that?

Lexy Hammonds: Oh, yeah. It was Bespoke. It was made for the character. Peter had this kind-of vision that this girl had this cool red leather jacket and she was into NASA and video games and space [laughs], all that kind-of stuff. So he had all these different buttons kind-of sewn onto a jacket. I really wanted to keep it, as one of those keepsakes from set but he wouldn’t let me. [laughs]

Daniel: Okay, so Peter has it?

Lexy Hammonds: I think he’s hoping to sell it for millions of dollars one day. [laughs] Or maybe to the Hard Rock Café where they have the [memorabilia] in the restaurants and stuff.

Daniel Prinn, Filmcraziest: Now, getting to the movie, what was it like creating your chemistry with Yutaka Takeuchi?

Lexy Hammonds: Wow, you know, Yutaka he’s honestly really easy to be around. He’s someone that, as soon as we met, we naturally got into fits of laughter, having conversations getting to know each other. Building on the chemistry, I think there was a natural friendship there. I think it just somewhat made it easier for us to feel comfortable around each other and I think that showed on screen. I don’t think we had to try too hard to try to fake it or anything. I think we connected as people and when you feel comfortable around someone, it makes the world of difference when you’re watching two people be romantic on screen.

Aside from that, we had a lot of discussions about both of our characters, what our dynamics are, what in real life would lead us to be so quick to make a decision that’s so intense. Clearly we’re both missing something in our current lives, we feel an emptiness. There’s clearly some kind-of common interest that we have that is met once we come together as the characters. I think once we fleshed that out and we kind-of understood what it is that would make us mesh together so quickly, as well as our chemistry off-screen as friends and co-workers, it just happened pretty naturally for us.

Again, be sure to stay tuned to the film’s Instagram page, their website and their Facebook page for festival announcements and other fun updates. If you’d rather listen to the podcast right here, I’ve included it directly below.