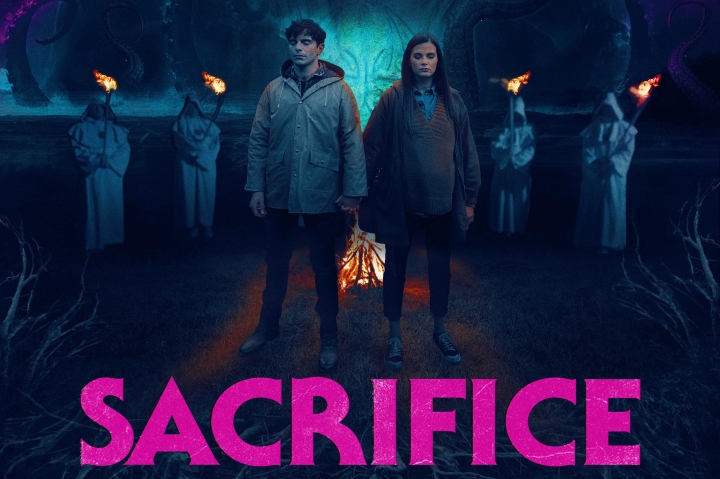 Following the death of his mother, Isaac (Ludovic Hughes) and his pregnant wife, Emma (Sophie Stevens) return to his hometown on a remote Norwegian Island to claim his inheritance, his family home. Once there, the facts of Isaac’s past come to the surface and the trip turns into a nightmare once they learn the townsfolk are a cult that worship a sea-dwelling deity.

Andy Collier and Toor Mian’s Sacrifice really brings the Lovecraftian in its imagery, horror, and especially in its deity The Slumbering One. In every shot of the sea, there’s dread in the cinematography (also by Andy Collier) and tone as we imagine what is lurking out there. Also a great aspect of the cinematography is the use of bright greens, purple’s and reds – and I’m sure a bunch of other colours – in several scenes involving water and other scenes.

The way the horror sequences are created is rooted more in the paranoia of the situation through Emma’s character. Her dreams become more eerie as the film goes on, as they help drive the rather quick pacing and give more surrealism to the film. However, it gets a bit easy to catch onto when she’s dreaming – as it usually involves water and tentacles while she’s doing mundane activities, but they’re great visually. Tying nicely into this is the town’s motto that they constantly say to each other – “Dream well” – and it’s also fitting because of their deity.

The townsfolk themselves are solid enough, mostly represented by the island’s sheriff, Renate (Barbara Crampton), who is a really fun cult leader and tells some great stories in the film. Also present are some of the other nice blokes (Lukas Loughran and Jack Kristiansen) who antagonize Isaac when they first get there because they think he’s an average American, but then they become legitimately frightened when Emma announces Isaac’s Norwegian surname.

I won’t outright spoil what his past entails, but it basically has to do with why his mother took him away from this place 25 years ago. As a character, Isaac is fine and performed well by Ludovic Hughes, though he becomes a bit boring as he becomes detached from his surroundings and just loses a sense of caring, to be as discreet as I can about that.

He and Emma handle this whole situation and community differently, as Isaac eventually has an open mind to this place, and Emma just wants to go home. This dynamic’s highlighted best in situations where Emma (very) lightly mocks the admittedly strange traditions of these people. While Isaac may have chuckled the day earlier; today he tells her “it’s unbecoming to mock someone else’s culture.”

Emma’s way into this situation and perspective of what’s going on just intrigued me more, and I liked Sophie Stevens as this character. The world building on this island is compelling, too, with the stories of their deity in the water. The imagery here with the paintings and creepy things lying around complement the story, and it’s a great job by the prop department and art team. Sacrifice focuses more on its Lovecraftian side, but I wanted more from the cult side of things.

I wanted to know why these islanders worship The Slumbering One; but maybe the people on the island don’t even know why. That could have been fleshed out more, but we instead spend so much time in Emma’s nightmares that we never really find out what makes the townsfolk tick when they’re awake… Some questions go unanswered by the end of the film, but the ending is great and subverts expectations enough that I’ll remember it.

The script, written by co-director Toor Mian with story by Andy Collier, and based on a short story by Paul Kane, doesn’t answer every question here, either, but it’s smart as it let’s you fill in some blanks and it sets everything up well and concludes well, too, albeit abruptly. It’s abrupt in the way that I wanted to see more and wanted to know more, because it could make for an exciting sequel in its own right.