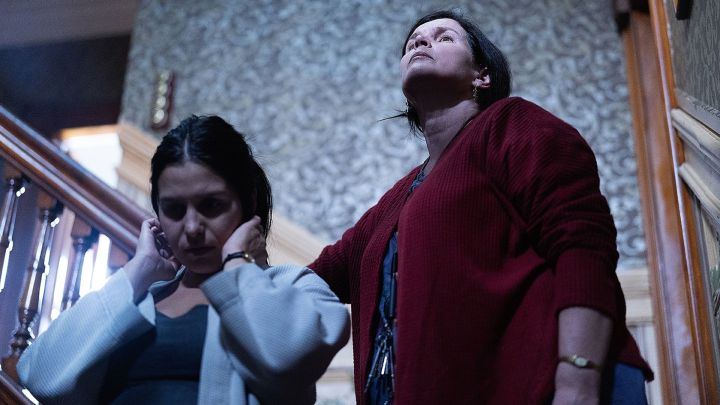 This review will contain minor spoilers.

A pregnant woman named Ellie (Emma Draper) returns to her childhood home after the death of her grandparents to close the estate and sell it. There, she reunites with her estranged mother, Ivy (Julie Ormond), as we learn the long-buried secrets of this family that slowly come to surface.

The aptly named Reunion combines family drama and mystery with haunted house horror, as Ellie is tormented by childhood memories throughout the film. This brings a non-linear structure as Ellie’s memories with her sister Cara (Ava Keane), and other memories, are triggered by events in the present, as the pacing feels similarly to Netflix mini-series The Haunting of Hill House.

This film isn’t nearly as creepy as that series, but Reunion still has eerie atmosphere in spades, thanks to direction by Jake Mahaffy and the score by Tim Oxton. In haunted house horror, its often at night where things get scary, but here, since the house still has secrets in the day, there are chilling moments when the sun’s shining bright, too. I always like a good horror flick that can make me be unsettling at any moment.

In fact, I counted more tense moments in the day here than at night, but the night offers no reprieve from the creepiness, either. As for the performances, the two core ones help carry the film. Julia Ormond is great as the overbearing, controlling mother who locks all the doors and the house and is the character that lends herself best for the film’s mystery.

A scene where she shouts at Ellie for boiling cauliflower instead of steaming them is totally this film’s “no wire hangers, EVER!” moment from Mommie Dearest. Note, it’s not as extreme or overacted as Ormond does such a strong job with the material, but that’s totally what it reminded me of. The mother’s a well-rounded character, though her mean streak as a person stops this from being a wholly enjoyable film.

Emma Draper plays a great Ellie, as the character just seems like a real sweetheart and I liked her performance. It’s interesting watching Ellie learn about her past and remembers her relationship with her sister. As she pieces together these memories, she’s the only one affected by the “haunting” and that gives it a psychological thriller angle, too, as some scenes are so strange it really makes us question the reality of this film.

Draper plays off of Ormond really well as the mom tries to control her and she challenges back, as well, and other aspects of Ellie like the book she’s writing and researching tie in interestingly into the overarching plot, even if I didn’t understand much of that.

I liked the mystery and atmosphere created here but the film lost me in the last 15 minutes as writer/director Jake Mahaffy throws a hail Mary at us. I liked the answers to a lot of the secrets here when it ties into drama of it all, but when we get more answers, it just felt too hectic to make any sense. Here is when the non-linear storytelling really hurt the film as it seems to combine two or three sequences of events into one and it’s hard to decipher what’s really happening. Had that been more clear, I think I like the ending a lot more, but I still think this film is worth watching for its atmosphere, performances and smart family dynamics.