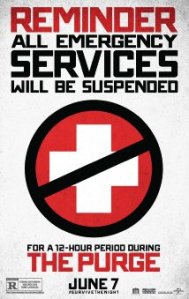 The year is 2022. America’s economy is flourishing, the unemployment rate is at 1%, and crime is almost non-existent. Except for one night a year; for twelve hours, all crime, including murder, is legal. The police cannot be called. I guess you could call them, but no one’s going to respond. The Annual Purge lets the American people release their inner beast, or let the tiger out of the cage, if you will.

This is the story of one family during the unforgettable Annual Purge of the eerily not-so-distant future, 2022. James Sandin (Ethan Hawke) sells security systems for a living, and his family is living the American dream. They settle in for the night, all cozy in an apparently impenetrable fortress. Or so they think. The son, Charlie (Max Burkholder, that kid from Daddy Day Care who says, “I missed!”), still forming his own opinion on the Purge, assists a helpless man outside by letting him into his home. Yeah, things are going to turn out just hunky-dory for you when you do a stupid thing like that.

A small mob of scholarly young folk wearing masks comes to their door, asking for the so-called “grotesque swine” to be delivered to them within the hour, or they’ll come into the house and kill the entire family. Now, the Sandins must make a choice: Keep their morals intact and fight, or give up the stranger and become the monsters from whom they hide.

The Purge has one of the most intriguing horror movie concept in quite some time. The movie just cannot do much with it. It tries to make a point using a successful, horror/thriller formula. The thought-provoking movie challenges one’s inner morals. It isn’t more than that. It’s partly a social commentary of what America might one day never become, and a commentary on the human race’s obsession with violence; and the fact that these people would rather bash in someone’s head to let off steam, instead of hitting a watermelon or a piñata.

It’s also a rushed home invasion horror flick. None of these characters are particularly likeable. The daughter is really just doing her own thing. She’s way out of the loop, she doesn’t know what’s going around the house, which really doesn’t reflect well on the rest of the family. The father, James, is a security system salesman who’s rather unlikeable. He’s the one calling the shots for the family. Mary (Lena Headey) is easily the most likeable character, mostly because she has a strong hold on her morals, and she will frustrate you the least. The most frustrating character of all is Charlie. He is one of the stupidest characters you’ll ever see in a horror movie, and that’s saying something. He is still forming his opinion about The Purge (as he’s supposed to be around 14 years old), and he will frustrate you a countless amount of times, and taint one’s enjoyment. (Oh, if you shine a flashlight all over the room, no one will see the light from underneath the door. Idiot.) His character represents the minority of people, the ones who do not support The Purge. The morals of this family clashes with the apparent norm of this futuristic society, that it’s all right to commit all the crimes one can, because there really isn’t anyone stopping you. And it also brings about class warfare. If you can afford the protection, that’s better for you. It kind-of makes me think this mirrors the two-tier health care system, because the rich are better off. If one can afford the protection, they probably won’t die; if one can’t afford protection, they’re screwed.

The Purge party of scholars led by a character called Polite Leader (Rhys Wakefield sporting an eerie smile) only want their target for their Annual Purge, but now I’m thinking they just want to kill as many people as they can muster. Only seconds after requesting their target, they cut the power to the Sandin home; making it that much harder for the Sandin’s to actually acquire the intruder, whose character name is Bloody Stranger. There are a few other problems with this group… What’s the point of wearing masks if all crimes are legal? They must be trying to be scarier, since they really are only apparently smart hooligans. (See, there might be a point to it – because nerds with machetes really aren’t so terrifying. Right?) These weirdos are also knocking on all the windows, swinging on swings, making threatening motions, staring into the cameras all weird, making menacing faces… Because that isn’t distracting enough when you’re trying to find someone with the power out, right?

The film has a bland, 10-minute introduction; a 40-minute suspenseful build-up; and a meager 25-minute (or so) pay-off. The first ten minutes are bland, at best; mostly because there’s simply a lot of insincere smiling and traditional, “Have a safe night, okay?” There’s a large focus on the social commentary, and a miniature one on the actual home invasion. Movie-goers will be buying tickets to the home invasion aspect; and there’s hardly enough of it. Once one digs underneath its original and intriguing concept, they will find The Strangers set in the year 2022. The masks, the themes, the atmosphere, and some of the scenes are similar. It seems we have received a sequel to The Strangers after all. Beneath the surface, this plays out like every other horror movie. It’s a true disappointment.

The movie’s suspenseful, but rarely scary. It is billed as a sci-fi horror/thriller flick, not a suspense movie; so that’s a true issue. You’ll jump two or three times, maybe. The concept is scary, because you’d be anxious enough waiting the eight minutes for the cops to appear; and in this situation, they’re not going to show. The masks are creepy, but not nearly as creepy as an insane, well-dressed Polite Leader with a chilling grin. Rhys Wakefield rocks the role, and he’s certainly the most memorable thing about this low-budget horror flick. He seems ecstatic that he might be able to kill a whole family, and not just the party’s target. He’s very menacing. The only other thing that is likely to haunt your dreams is an eerie Chucky-esque doll/camera/radio-controlled car contraption controlled by Charlie. Other than those two things, most of the scary-ish things about this movie left my mind – and I slept like a baby. This hardly leaves a lasting impression, and since I’m a paranoid person; by God, horror movies need to keep me up at night to receive a great grade.

The concept helps make this memorable. The general movie only ends up being incredibly average. The movie also falls victim to countless, frustrating clichés. This will leave a lot of movie-goers disappointed. Rhys Wakefield is the only other thing that makes this worthwhile at all; but this is still the latest movie to be added to the Great Concept, Poor Execution category.