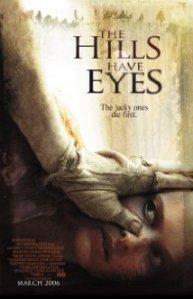 The Hills Have Eyes

Tagline: The lucky ones die first

A suburban American family is being stalked by a group of psychotic people who live in the desert, far away from civilization.

The Hills Have Eyes should get some props for actually being a horror flick that isn’t totally mindless. Wait a second… It is. It’s also just nasty. But… It is slightly easy to care for a select few of the characters, instead of rooting the baddies to just kill them off one by one, like most slasher flicks. Though, the villains are despicable, unsettling and nasty mutated freaks and not in a way one would want their horror villains to be. They’re some of the ugliest things I’ve ever witnessed, they’re certainly not the cool type of mutants to hang out with Charles Xavier, and they’re actually too eerie to be a highlight of a freak show attraction.

Some of the movie is creepy, but when the middle comes, it’s just downhill from there. Horror movies are universally known for characters to do some of the most idiotic things ever, but some characters’ actions are incredibly irresponsible (Hint: If you see your dog laying dead with some of his body taken off… Tell someone), and by the time some of them get picked off at the scene where the action heats up and a weird mutant guy actually takes the head off a bird and drinks from it, it’s hard to care that they get killed. They’re just so idiotic.

This is one of the nastiest and worst horror flicks I’ve ever seen, and it’s not even a fun gore-fest. Since many believe this outdoes the original, the original must be one of the worst movies ever made. The only redeeming qualities this has is it’s sometimes creepy (but it soon gets irritating) and Aaron Stanford’s character goes through a kind-of David Sumner-esque transformation to stand up for himself. Other than that, it’s poorly constructed, the acting is hardly top-tier (Stanford is okay), it’s nasty, you’ll need a strong stomach to stand it, it’s stupid, unrewarding, and just way too long. Only a few films make me angry to think back to, and this is one of them.

4 thoughts on “The Hills Have Eyes”