Tagline: When the game is over, a new world comes to life.

Wreck-It Ralph has one film aspect thing we are always searching for: nostalgia. Nostalgia is when you look back at some point in your life, and cherish that solitary memory. In the case of this great Disney animation film, we find ourselves looking back to our childhoods, when we would spend tireless hours playing Super Mario Bros. to take Princess Peach back from that spiky-backed Bowser or; controlling Donkey Kong to jump over those pesky barrels; or making Pacman run away from those ghosts. This nostalgia is most prominent for those 80s and 90s children. In Wreck-It Ralph, it truly shines through. In animation, this great feeling has not been shown so clearly as it has been here.

In other 2012 films, like The Perks of Being a Wallflower, the nostalgia feeling was looking back at the good times of high school (for my case, early high school, since this is my graduating year) or those generally depressing and lonely times. We’ve seen that in plenty of teen films before it, so it’s a traditional nostalgic feeling in our hearts. With Wreck-It Ralph, it feels truly original because a great video game tribute has never been paid quite like this one, besides documentaries like Special When Lit that rediscovers the long lost game of Pinball.

The story follows Ralph (voiced by John C. Reilly) the villain of a 30-year old arcade game called Fix-It Felix Jr., where Ralph wrecks it and Felix (voiced by Jack McBrayer) races the clock to fix what Ralph has wrecked. Ralph feels like an outcast in his own game, because he lives in a dump across the way from his video game co-workers, while they hang out in the penthouse and party it up. Ralph sets out for different games, that ultimately wreaks havoc in his arcade, in search of a medal so he can redeem himself, and become the hero he has always wanted to be. He eventually ends up at Sugar Rush and meets the charismatic Vanellope (voiced by Sarah Silverman) a computer glitch in her own game. The two outcasts team up together, to defeat antagonists, and make names for themselves.

The main antagonist is the charismatic dictator of Sugar Rush, King Candy (voiced by Alan Tudyk). The other antagonists are from some games Ralph encounters, that find their way into the game of Sugar Rush. Also, there is the arcade manager, Mr. Litwak, who proposes the overbearing threat of pulling the plug of Ralph’s game if Ralph and Felix can’t get back to the game in time. This has the tendency to make the film slightly crowded, but it still is unarguably enjoyable and fun. A few things that make the film fun are the great and often delicious appearing set designs, very seemingly fun arcade games, and the stunningly beautiful [3D] visual effects. The humour is often hysterical, and very funny even for those who are not children. Although, if one is over the age of thirteen, they may think the toilet humour has the huge tendency to be obnoxious and over the top. Those toilet humour jokes are quite hit-and-miss, but most do indeed hit. To add to the general comedy of the film, there are also some exciting action sequences, like the races that made me want to play a good old game of Mario Kart. There is one sequence near the end of the film that features a creature that may just be a little too mature or frightening for a basic children’s film; it reminded me of Pennywise the Clown from Stephen King’s It (at the least the bottom half of it). 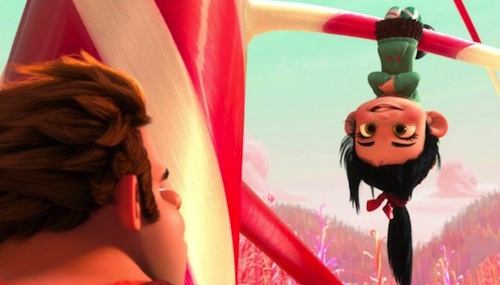 The message present (don’t be afraid to be a hero) is great and does not feel forced. What does feel forced, however, are some of the relationships. The one relationship between Felix and Calhoun (voiced by Jane Lynch), feels forced because they just seem so opposite. The relationship between Ralph and Vanellope, on the other hand, was absolutely precious, often heartwarming (and at times heartbreaking), natural and inspiring. It’s normal that this relationship may mend together well, because Ralph’s towering build, that may remind viewers of Donkey Kong, and then Vanellope’s figure that looks like a miniature Princess Daisy, seems like a father-daughter relationship. Instead, it feels like a real, non-condescending friendship. Not to mention, they are both great characters. Vanellope is absolutely adorable and hysterical, and one cannot help but smile when she comes on-screen. She just offers a needed supporting structure to the general film. These characters, and all others, do great jobs of portraying emotions, even though that isn’t hard to do with animation, but regardless, the viewer still feels what they feel – from inspiration, to loneliness, to excitement, to heartbreak. The characters are each well put together, and have nice backgrounds.

Wreck-It Ralph is the finest 2012 animated feature, (but there isn’t any competition, because surprisingly to me, it’s the only 2012 released animated feauture I’ve seen) and is generally one of the finest and most original of 2012. The only thing I thought of with the coming to life at night is the two Night at the Museum films (and more obviously the Toy Story trilogy), but comparing this to that isn’t exactly fair since they are so different. Disney has delivered us a great film yet again, and mashed two generally loved things together: their acclaimed animation, and video games. I had high expectations for this film, and this really rocked my world.